Dendritic cell–based (DC-based) immunotherapy represents a promising approach to the prevention and treatment of many diseases, including cancer, but current strategies have met with only limited success in clinical and preclinical studies. Previous studies have demonstrated that a TAT peptide derived from the HIV TAT protein has the ability to transduce peptides or proteins into various cells. Here, we describe the use of TAT-mediated delivery of T cell peptides into DCs to prolong antigen presentation and enhance T cell responses. While immunization of mice with DCs pulsed with an antigenic peptide derived from the human TRP2 protein generated partial protective immunity against B16 tumor, immunization with DCs loaded with a TAT-TRP2 peptide resulted in complete protective immunity, as well as significant inhibition of lung metastases in a 3-day tumor model. Although both DC/TRP2 and DC/TAT-TRP2 immunization increased the number of TRP2-specific CD8+ T cells detected by Kb/TRP2 tetramers, T cell activity elicited by DC/TAT-TRP2 was three- to tenfold higher than that induced by DC/TRP2. Furthermore, both CD4+ and CD8+ T cells were required for antitumor immunity demonstrated by experiments with antibody depletion of subsets of T cells, as well as with various knockout mice. These results suggest that a TAT-mediated antigen delivery system may have important clinical applications for cancer therapy. 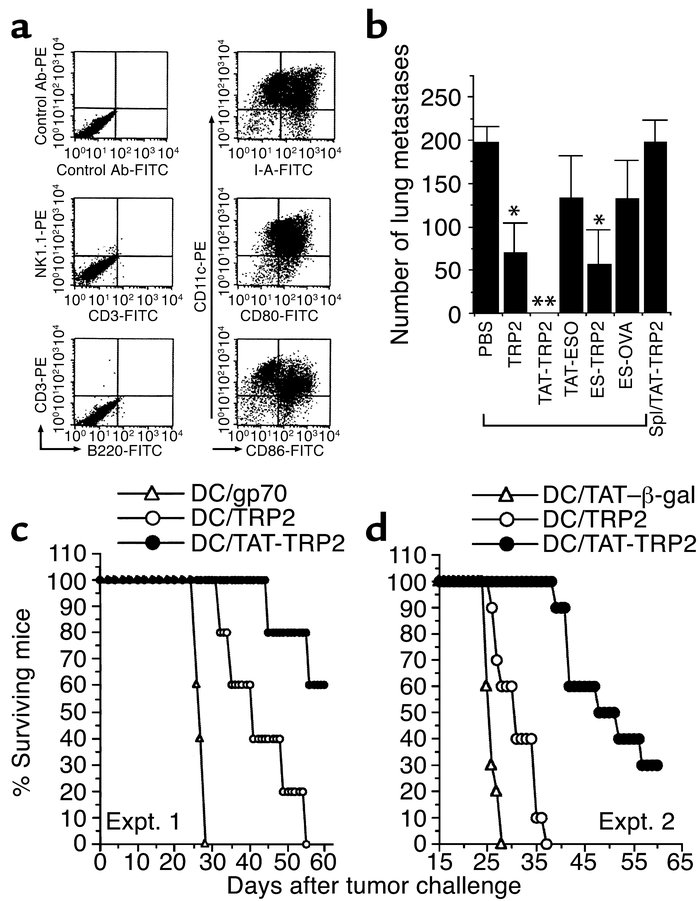 Intracellular delivery of TRP2 peptide into DCs for the generation of potent antitumor immunity. () Surface phenotype of DCs generated from bone marrow of B6 mice. DCs were stained with FITC–conjugated anti–I-A, anti-CD80, anti-CD86, or other antibodies, followed by staining with PE–conjugated anti-CD11c, and analyzed by flow cytometry. The frequency of double positive staining for CD11c and I-A, CD80, or CD86 was over 65%, while staining for CD3, B220, and NK1.1 was negative. () Immunization of mice with mature DCs pulsed with TAT-TRP2 generates protective immunity. B6 mice were immunized with DCs loaded with each indicated peptide; this was followed two weeks later by intravenous injection of B16 tumor cells. The number of lung metastases was counted after 14 days of B16 tumor challenge. Mean numbers ( = 8 per group) of lung metastases ± SEM are presented. Statistical significance of differences between the control group and testing groups: * < 0.05; ** < 0.0007. Spl, splenocytes. () Mice were immunized with DCs loaded with gp70 (control peptide), TRP2, and TAT-TRP2 peptides twice and were then challenged with B16 tumor cells. Animal survival was monitored up to 60 days after tumor challenge. Two independent experiments ( = 5 per group in experiment 1 and = 10 per group in experiment 2) are shown. The survival advantage of the groups receiving DC/TAT-TRP2 treatment over the control groups receiving DC/gp70 or TAT–β-gal is statistically significant ( < 0.001), as determined by the log rank test.