TGF-βs play diverse and complex roles in many biological processes. In tumorigenesis, they can function either as tumor suppressors or as pro-oncogenic factors, depending on the stage of the disease. We have developed transgenic mice expressing a TGF-β antagonist of the soluble type II TGF-β receptor:Fc fusion protein class, under the regulation of the mammary-selective MMTV-LTR promoter/enhancer. Biologically significant levels of antagonist were detectable in the serum and most tissues of this mouse line. The mice were resistant to the development of metastases at multiple organ sites when compared with wild-type controls, both in a tail vein metastasis assay using isogenic melanoma cells and in crosses with the MMTV-neu transgenic mouse model of metastatic breast cancer. Importantly, metastasis from endogenous mammary tumors was suppressed without any enhancement of primary tumorigenesis. Furthermore, aged transgenic mice did not exhibit the severe pathology characteristic of TGF-β null mice, despite lifetime exposure to the antagonist. The data suggest that in vivo the antagonist may selectively neutralize the undesirable TGF-β associated with metastasis, while sparing the regulatory roles of TGF-βs in normal tissues. Thus this soluble TGF-β antagonist has potential for long-term clinical use in the prevention of metastasis. 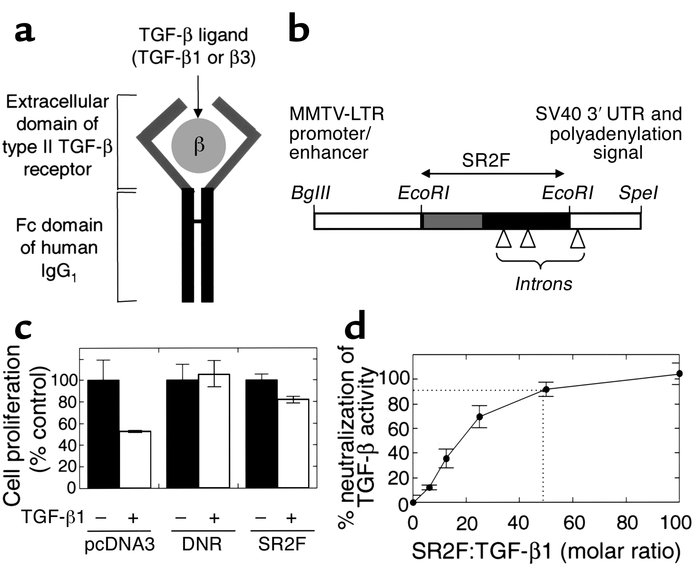 Antagonist design and in vitro validation. () Soluble TGF-β antagonist SR2F. This antagonist consists of the extracellular domain of the human type II TGF-β receptor fused to the Fc domain of human IgG1. It can bind TGF-β1 and TGF-β3, but not TGF-β2. () Transgene construct. Transgene expression is driven by the mammary-selective MMTV-LTR promoter/enhancer. Small introns are present in the Fc domain of SR2F and the SV40 3′ UTR to enhance transgene expression in vivo. () Reversal of the growth-inhibiting effects of TGF-β1 by transfected SR2F. MDA MB435 cells stably transfected with empty vector (pcDNA3), membrane-bound dominant-negative type II TGF-β receptor (DNR), or SR2F were assayed for their resistance to the growth-inhibiting effects of added TGF-β1 (5 ng/ml). Cell proliferation is normalized to the “no TGF-β” condition for each construct. Results are the mean ± SD of three determinations. () Determination of the molar ratio of purified SR2F to TGF-β1 required for neutralization of TGF-β activity. The ability of increasing amounts of purified SR2F to reverse the growth-inhibiting activity of 2 pM TGF-β1 on Mv1Lu cells was determined. Results are the mean ± SD for three determinations.