Vascular calcification is a common complication of chronic kidney disease (CKD), and one of the main risk factors for increased cardiovascular morbidity and mortality in patients with CKD. In this issue of the JCI, Ouyang and Su et al. report that Alkb homolog 1 (ALKBH1), a DNA demethylase, reduced DNA N6-methyladenine (6mA) in vascular smooth muscle cells (VSMCs) and leukocytes, thus leading to aortic arch calcification in the patients with CKD. During the progression of vascular calcification, increased ALKBH1 expression was linked to decreased 6mA levels, findings that the authors noted in both patients with CKD and CKD mouse models. The kidney and vascular disease risk factor soluble urokinase receptor (suPAR) was also elevated in the plasma. Notably, lower 6mA levels induced BMP2-mediated osteogenic reprogramming in the VSMCs. These findings present a function of ALKBH1 in vascular calcification and provide a framework for therapeutic strategies.

Mechanism of ALKBH1 in CKD with vascular calcification. 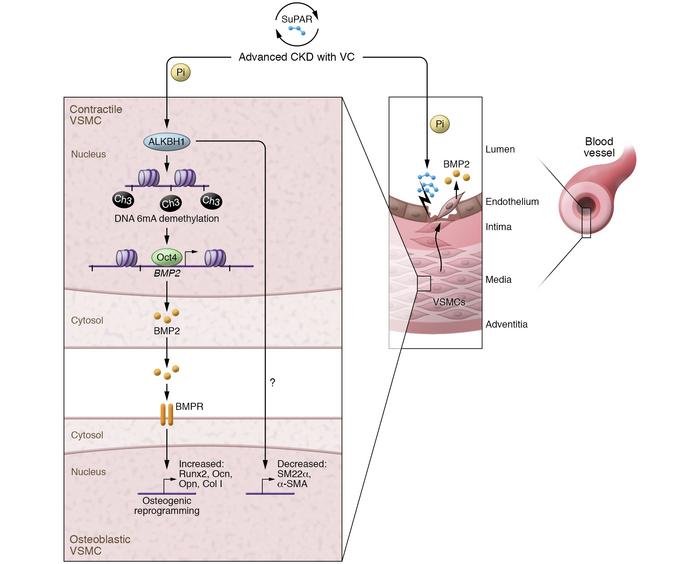 Hyperphosphatemia in advanced CKD with vascular calcification (VC) induces ALKBH1 expression, leading to a reduced 6mA level that promotes Oct4 binding to the promoter and activates transcription in VSMC. High serum suPAR levels in patients with CKD may also aggravate the ALKBH1/Oct4/BMP2 cascade. Meanwhile, suPAR can induce the migration of VSMCs from the media to the intima, where VSMCs are exposed to the calcification stimuli, triggering the ALKBH1/Oct4/BMP2 cascade. As a result, BMP2 is secreted from VSMCs, and the BMP2/BMPR signaling pathway stimulates the expression of osteoblast markers such as Runx2, OCN, OPN, and Collagen I, resulting in osteogenic reprogramming and vascular calcification.