In vivo regulation of plasminogen function by plasma carboxypeptidase B

In vivo regulation of plasminogen function by plasma carboxypeptidase B 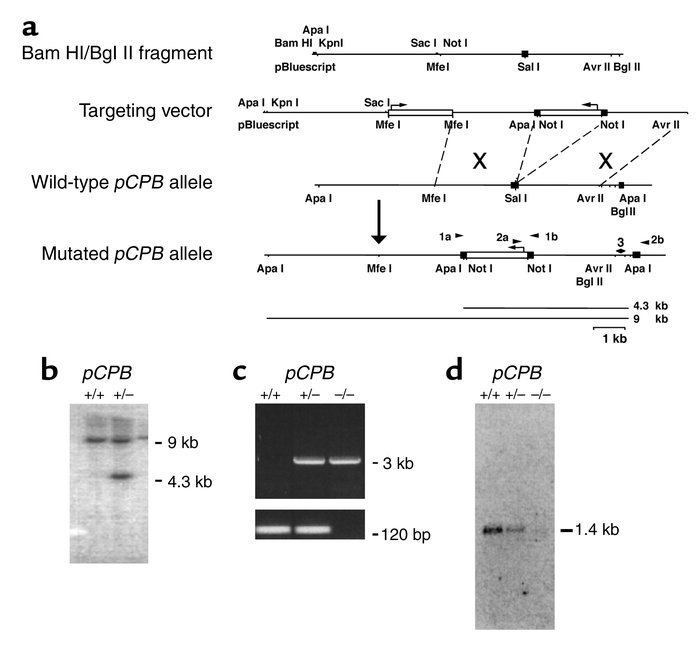 Generation and characterization of -deficient mice. () Design of the gene-targeting vector. Upon homologous recombination, a mutated pCPB allele was created that contained the resistance gene inserted in exon 2. () Southern blot analysis of gene disruption in ES cells. The 80-mer probe (3 in ) detected an approximately 9-kb fragment from the wild-type allele, whereas the disrupted allele produced a 4.3-kb fragment after ApaI digestion of genomic DNA. () PCR analysis of mouse tail tip DNA. Mice carrying a mutant gene were identified using a -specific primer (2a in ) and a primer located with exon 3 (2b in ). The PCR amplification produced a product of about 3 kb in and mice. Homozygote animals were identified by an additional PCR analysis. An exon primer pair situated 5′ (1a in ) and 3′ (1b in ) of the insertion site amplified a 120-bp fragment in and animals only. () Northern blot analysis of transgenic mice. Total RNA was isolated from 6-week-old mouse livers of , , and animals. Hybridization with a 600-bp random-labeled DNA fragment revealed a 1.4-kb band present in and animals, but absent from animals.