BACKGROUND Multisystem inflammatory syndrome in children (MIS-C) is a rare but potentially severe illness that follows exposure to severe acute respiratory syndrome coronavirus 2 (SARS-CoV-2). Kawasaki disease (KD) shares several clinical features with MIS-C, which prompted the use of intravenous immunoglobulin (IVIG), a mainstay therapy for KD. Both diseases share a robust activation of the innate immune system, including the IL-1 signaling pathway, and IL-1 blockade has been used for the treatment of both MIS-C and KD. The mechanism of action of IVIG in these 2 diseases and the cellular source of IL-1β have not been defined.METHODS The effects of IVIG on peripheral blood leukocyte populations from patients with MIS-C and KD were examined using flow cytometry and mass cytometry (CyTOF) and live-cell imaging.RESULTS Circulating neutrophils were highly activated in patients with KD and MIS-C and were a major source of IL-1β. Following IVIG treatment, activated IL-1β+ neutrophils were reduced in the circulation. In vitro, IVIG was a potent activator of neutrophil cell death via PI3K and NADPH oxidase, but independently of caspase activation.CONCLUSIONS Activated neutrophils expressing IL-1β can be targeted by IVIG, supporting its use in both KD and MIS-C to ameliorate inflammation.FUNDING Patient Centered Outcomes Research Institute; NIH; American Asthma Foundation; American Heart Association; Novo Nordisk Foundation; NIGMS; American Academy of Allergy, Asthma and Immunology Foundation. 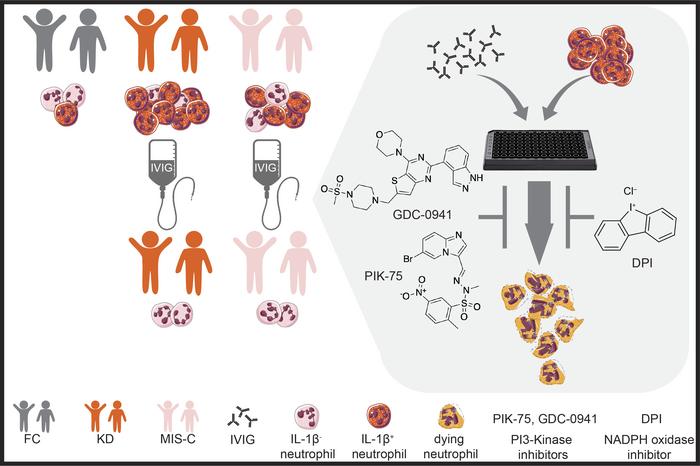