The gut, its microbiome, and the brain: connections and communications

The gut, its microbiome, and the brain: connections and communications

Modern research on gastrointestinal behavior has revealed it to be a highly complex bidirectional process in which the gut sends signals to the brain, via spinal and vagal visceral afferent pathways, and receives sympathetic and parasympathetic inputs. Concomitantly, the enteric nervous system within the bowel, which contains intrinsic primary afferent neurons, interneurons, and motor neurons, also senses the enteric environment and controls the detailed patterns of intestinal motility and secretion. The vast microbiome that is resident within the enteric lumen is yet another contributor, not only to gut behavior, but to the bidirectional signaling process, so that the existence of a microbiota-gut-brain “connectome” has become apparent. The interaction between the microbiota, the bowel, and the brain now appears to be neither a top-down nor a bottom-up process. Instead, it is an ongoing, tripartite conversation, the outline of which is beginning to emerge and is the subject of this Review. We emphasize aspects of the exponentially increasing knowledge of the microbiota-gut-brain “connectome” and focus attention on the roles that serotonin, Toll-like receptors, and macrophages play in signaling as exemplars of potentially generalizable mechanisms.

Neural pathways that carry the bidirectional signaling traffic between the gut and the brain. 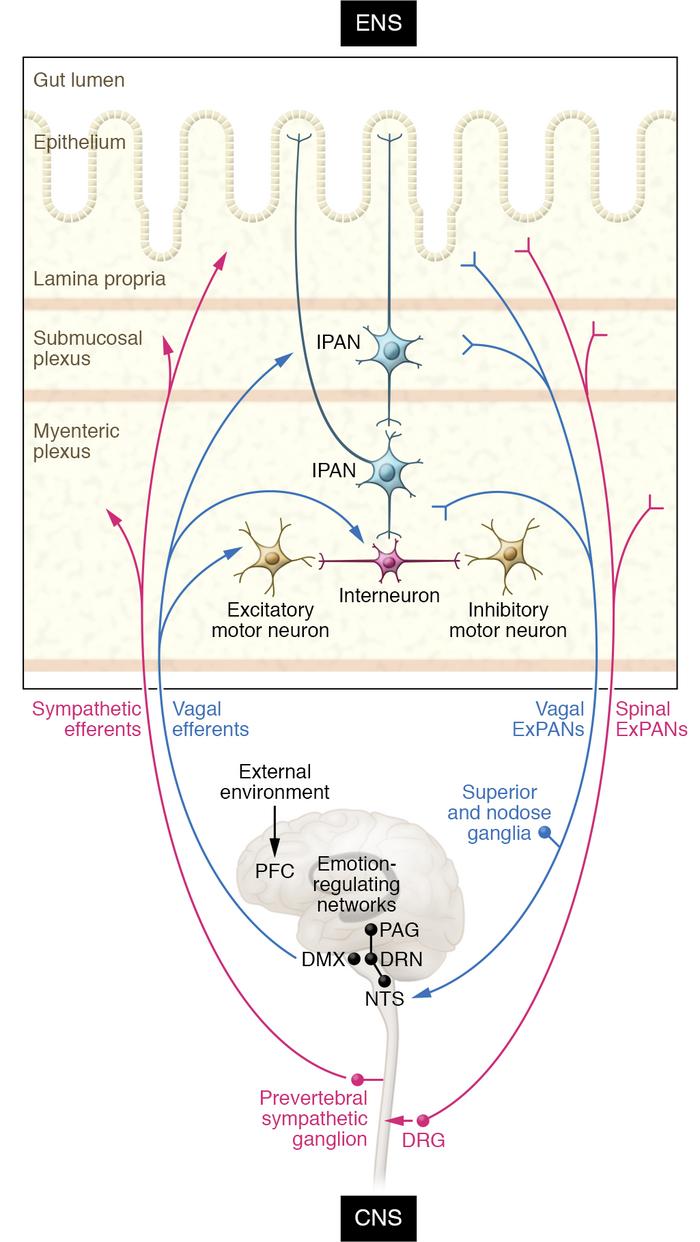 The brain-to-bowel efferent signals (pink and blue arrows, left) are mostly autonomic. Parasympathetic axons (blue) depart predominantly from the dorsal motor nucleus of the vagus (DMX) in the brainstem and are conducted through the vagus nerves to the bowel, where they terminate on selected neurons within the two plexuses of the ENS. Additional parasympathetic fibers exit the sacral spinal cord to terminate on enteric neurons of the mid- to distal colon (not shown). Sympathetic preganglionic axons (pink) leave the spinal cord at thoracic and lumbar levels, synapse with postganglionic neurons, primarily in prevertebral sympathetic ganglia, and terminate within the bowel. The bowel-to-brain afferent signals are carried by two types of ExPANs. Spinal ExPANs (pink) have their cell bodies in dorsal root ganglia and project into the CNS at spinal levels. Vagal ExPANs (blue) have their cell bodies in the nodose and superior ganglia of the vagi and project mainly to the nucleus of the solitary tract (NTS). From the NTS, signals emanating from the gut can be referred to the dorsal raphe nucleus (DRN) and periaqueductal gray matter (PAG) and to emotion-regulating networks that include the limbic system. The details of gut behavior are largely controlled by the intrinsic neurons of the ENS. This system contains IPANs, which project to the mucosa and receive information from epithelial sensors or respond directly to stimuli impinging on the bowel. The ENS also comprises intrinsic excitatory and inhibitory motor neurons and ascending and descending interneurons. Both enteric plexuses contain IPANs; secretomotor neurons are largely in the submucosal plexus, while the motor neurons that control the smooth muscle of the muscularis externa are in the myenteric plexus. The enteric plexuses reciprocally project to one another.