Chemokines are involved in recruitment and activation of hematopoietic cells in sites of infection and inflammation. The M3 gene of the γ-herpesvirus γHV68 encodes an abundant secreted protein that binds CC chemokines with high affinity. We report here that this gene is essential for efficient induction of lethal meningitis by γHV68. An M3 mutant γHV68 (γHV68-M3.stop) was 100-fold less virulent than wild-type or marker rescue control (γHV68-M3.MR) viruses after intracerebral inoculation. After intracerebral inoculation, γHV68-M3.stop grew to lower titers than γHV68 or γHV68-M3.MR in the brain but spread to and grew normally in the spleen and lung. Expression of several CC chemokines was significantly induced in the CNS by γHV68 infection. Consistent with M3 acting by blockade of CC chemokine action, γHV68 induced a neutrophilic meningeal inflammatory infiltrate, while γHV68-M3.stop induced an infiltrate in which lymphocytes and macrophages predominated. In contrast to the important role of M3 in lethal meningitis, M3 was not required for establishment or reactivation from latent infection or induction of chronic arteritis. These data suggest a role for chemokines in the protection of the nervous system from viral infection and that the M3 protein acts in a tissue-specific fashion during acute but not chronic γHV68 infection to limit CC chemokine–induced inflammatory responses. 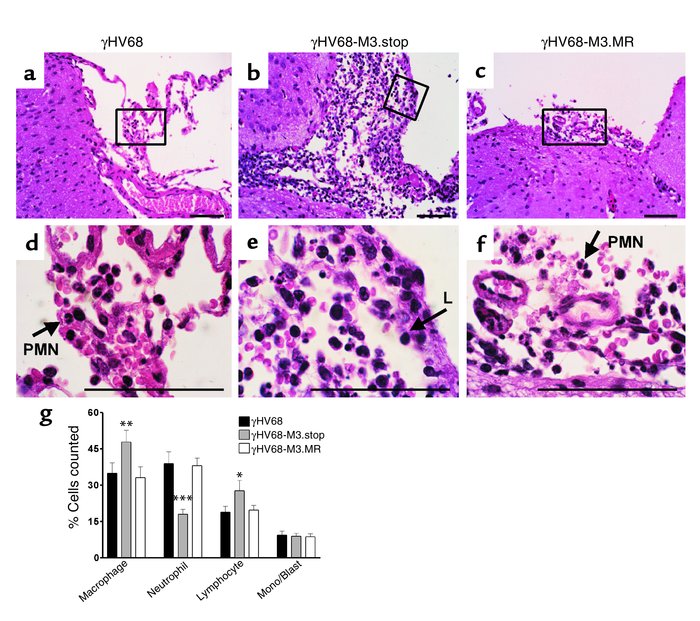