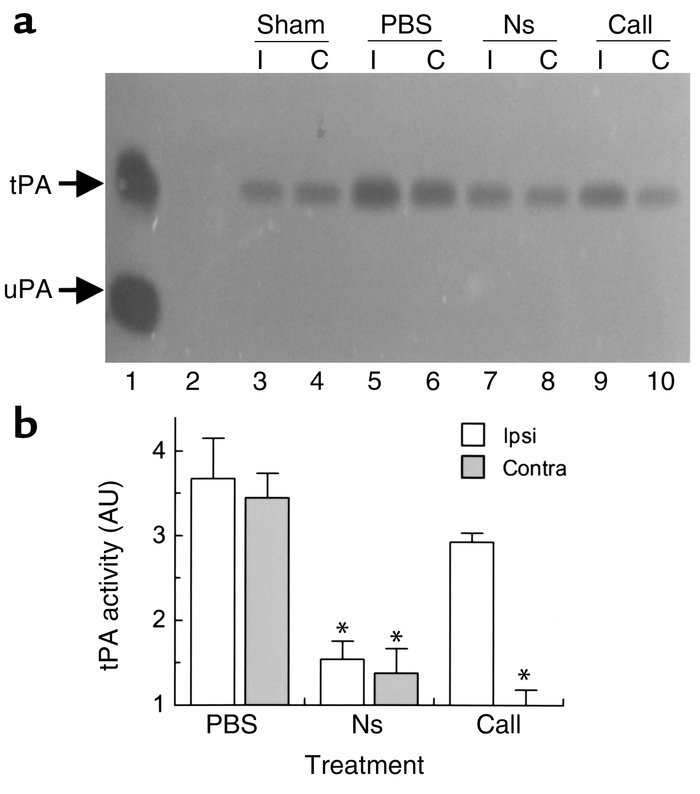 Analysis of tPA activity in brain extracts. () SDS-PAGE zymography of brain extracts. Lane 1 is a mixture of human tPA and a rat kidney extract as a marker for rat urokinase plasminogen activator (uPA). Lane 2 is empty, and lanes 3–10 are hippocampal extracts 1 hour after KA injection. Lanes 3, 5, 7, and 9 are ipsilateral (I) and lanes 4, 6, 8, and 10 are contralateral (C) to the injection. Lanes 3 and 4 are from sham-operated animals that did not receive KA (Sham), and all other lanes show animals that received KA. Lanes 5 and 6 show PBS-treated animals, lanes 7 and 8 are from neuroserpin-treated animals (Ns), and lanes 9 and 10 are from animals that underwent corpus callosotomy (Call). () Quantitative analysis of PA activity from SDS-PAGE zymography of brain extracts 1 hour after KA injection. The results represent the average fold increase in tPA activity in the hippocampus ipsilateral (Ipsi) and contralateral (Contra) to the KA injection, relative to normal base-line tPA activity in sham-operated animals. PBS and Ns represent animals treated with PBS or neuroserpin, respectively ( = 5 for each condition), and Call represents brain extracts of animals that underwent corpus callosotomy ( = 2). * < 0.05 relative to PBS-treated animals. AU, arbitrary units.