Patients with congenital lymphedema suffer from tissue swelling in part due to mutations in genes regulating lymphatic valve development. Lymphatic valve leaflets grow and are maintained throughout life in response to oscillatory shear stress (OSS), which regulates gene transcription in lymphatic endothelial cells (LECs). Here, we identified the first transcription factor, Foxo1, that repressed lymphatic valve formation by inhibiting the expression of valve-forming genes. We showed that both embryonic and postnatal ablation of Foxo1 in LECs induced additional valve formation in postnatal and adult mice in multiple tissues. Our quantitative analyses revealed that after deletion, the total number of valves in the mesentery was significantly (P < 0.01) increased in the Foxo1LEC-KO mice compared with Foxo1fl/fl controls. In addition, our quantitative real-time PCR (RT-PCR) data from cultured LECs showed that many valve-forming genes were significantly (P < 0.01) upregulated upon knockdown of FOXO1. To confirm our findings in vivo, rescue experiments showed that Foxc2+/– mice, a model of lymphedema-distichiasis, had 50% fewer lymphatic valves and that the remaining valves exhibited backleak. Both valve number and function were completely restored to control levels upon Foxo1 deletion. These findings established FOXO1 as a clinically relevant target to stimulate de novo lymphatic valve formation and rescue defective valves in congenital lymphedema.

Postnatal deletion of in the lymphatic vasculature leads to additional valve growth. 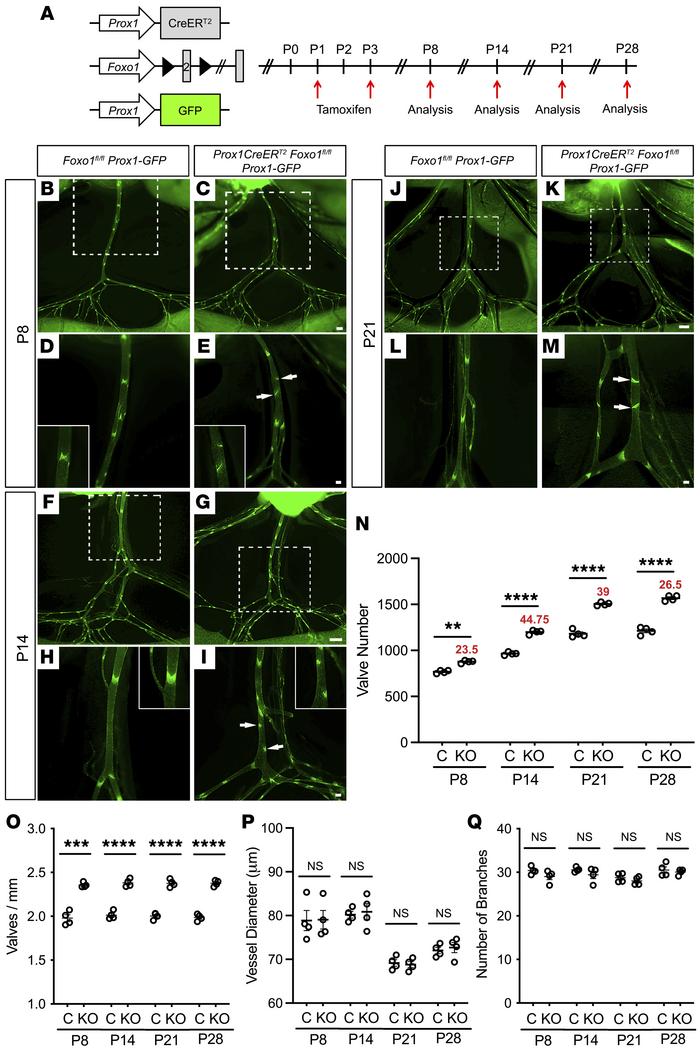 () Tamoxifen injection procedure for postnatal deletion of . (–) Fluorescence imaging of the morphology of the mesenteric lymphatic vasculature indicated by GFP expression from P8, P14, and P21. The mesentery has many valve initiation and elongation areas (white arrows). , , , , , and are the higher magnification images of the white squared areas in , , , , , and . () Total number of mature valves from each mesentery. The red numbers are the average number of immature valves. () Valves per millimeter from each mesentery. () The average diameter of the large collecting vessels from each mesentery. () The average number of the branches located in the thinner precollecting lymphatic vessels close to the intestinal wall from 10 large collecting vessels in each mesentery. Scale bars are 500 μm in , , and , and 100 μm in , , and . All values are mean ± SEM. Four controls and 4 knockout mesenteries were used in each analysis (–). ** 0.01, *** 0.001, **** 0.0001, calculated by unpaired Student’s test.