The discovery of insulin revisited: lessons for the modern era

The discovery of insulin revisited: lessons for the modern era

2021 to 2022 marks the one hundredth anniversary of ground-breaking research in Toronto that changed the course of what was, then, a universally fatal disease: type 1 diabetes. Some would argue that insulin’s discovery by Banting, Best, Macleod, and Collip was the greatest scientific advance of the 20th century, being one of the first instances in which modern medical science was able to provide lifesaving therapy. As with all scientific discoveries, the work in Toronto built upon important advances of many researchers over the preceding decades. Furthermore, the Toronto work ushered in a century of discovery of the purification, isolation, structural characterization, and genetic sequencing of insulin, all of which influenced ongoing improvements in therapeutic insulin formulations. Here we discuss the body of knowledge prior to 1921 localizing insulin to the pancreas and establishing insulin’s role in glucoregulation, and provide our views as to why researchers in Toronto ultimately achieved the purification of pancreatic extracts as a therapy. We discuss the pharmaceutical industry’s role in the early days of insulin production and distribution and provide insights into why the discoverers chose not to profit financially from the discovery. This fascinating story of bench-to-beside discovery provides useful considerations for scientists now and in the future.

The discovery of insulin and the first human administration. 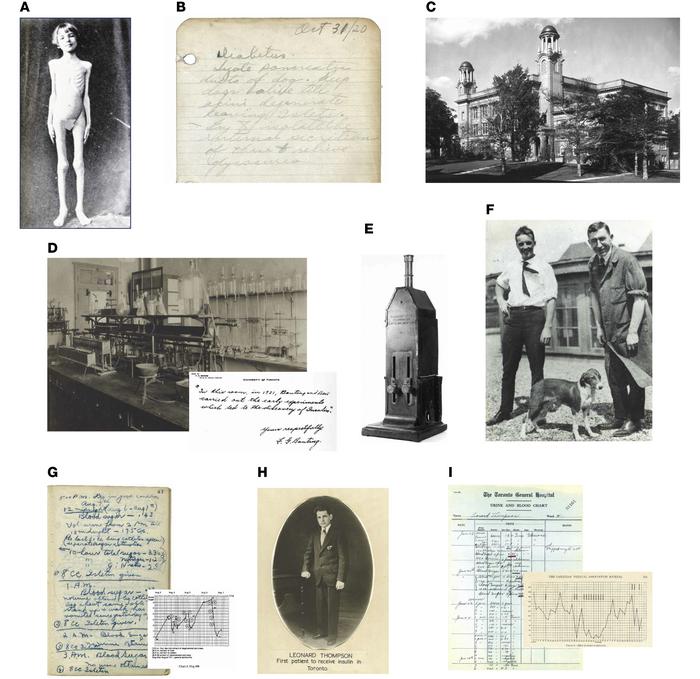 () Young girl with type 1 diabetes, which, before 1921, was a death sentence. () The Toronto insulin story began on October 31, 1920, when Dr. Frederick Banting noted an idea for an experiment to isolate an internal secretion from the pancreas. () The Medical Building, University of Toronto, stood at the center of a uniquely linked group of medical and scientific institutions including the Toronto General Hospital and the University’s public health biologicals producer, Connaught Laboratories. () Laboratory in which Banting and Best’s experiments were performed. () Colorimeter for analyzing blood and urine glucose levels. () Charles Best (left) and Dr. Frederick Banting (right) with a dog on the roof of the Medical Building, August 1921. After meeting Dr. J.J.R. Macleod, Head of Physiology at U of T, Banting was given a lab, experimental dogs, and the assistance of undergraduate student Charles Best. Over the summer of 1921, their notebooks reported encouraging results with “Isletin” controlling blood sugar levels in depancreatized dogs. () Banting’s notebook for August 7, 1921, and chart, showing first blood sugar reductions using “Isletin” in dog 408. () On January 11, 1922, a 14-year-old patient with type 1 diabetes, Leonard Thompson, was the first to receive an injection of the pancreatic extract, but with no effect. () On January 23, Thompson received a more purified extract with good results. This extract was developed by Dr. James Collip, a biochemist, who joined Banting and Best in December 1921. Images courtesy of The Thomas Fisher Rare Book Library, University of Toronto.