Three genes, TTF1, TTF2, and PAX8, involved in thyroid gland development and migration have been identified. Yet systematic screening for defects in these genes in thyroid dysgenesis gave essentially negative results. In particular, no TTF1 gene defects were found in 76 individuals with thyroid dysgenesis even though a deletion of this gene in the mouse results in thyroid and lung agenesis and defective diencephalon. We report a 6-year-old boy with predominant dyskinesia, neonatal respiratory distress, and mild hyperthyrotropinemia. One allele of his TTF1 gene had a guanidine inserted into codon 86 producing a nonsense protein of 407, rather than 371, amino acids. The mutant TTF1 did not bind to its canonical cis-element or transactivate a reporter gene driven by the thyroglobulin promoter, a natural target of TTF1. Failure of the mutant TTF1 to interfere with binding and transactivation functions of the wild-type TTF1 suggested that the syndrome was caused by haploinsufficiency. This was confirmed in mice heterozygous for Ttf1 gene deletion, heretofore considered to be normal. Compared with wild-type littermates, Ttf1+/– mice had poor coordination and a significant elevation of serum thyrotropin. Therefore, haploinsufficiency of the TTF1 gene results in a predominantly neurological phenotype and secondary hyperthyrotropinemia. 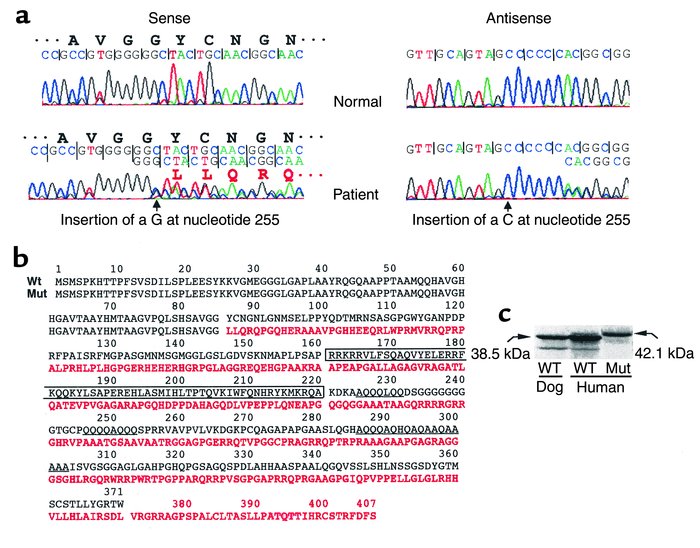 Identification of the mutation in the gene and synthesis of the mutTTF1. () Fragments of sequence chromatograms of PCR-amplified genomic DNA from a normal individual and the patient. Sense and the corresponding antisense sequences show the insertion of a G and a C, respectively (arrows), at position 255 of the patient’s gene (numbering beginning with the first coding nucleotide in exon 2). The mutation involves one of the two alleles producing a “double” sequence beyond the insertion site. The encoded amino acids of wild-type and mutant genes are indicated. () The deduced amino acid sequence of the mutTTF1 (divergent sequence in red) compared with the wtTTF1 (in black). The homeobox and the glutamine/alanine–rich regions of the wtTTF1 are boxed and underlined, respectively. Note that these sequences are lost in the mutTTF1, which has 36 additional amino acids. () The products of in vitro translation, analyzed by SDS-PAGE. One microgram of plasmid DNA containing the wild-type (dog and human) and mut cDNAs served as template in a coupled transcription/translation reaction in rabbit reticulocyte lysate in the presence of 35S-Met. The dried gel was then radioautographed. The larger size of the mutTTF1 was confirmed. A smaller amount of a lower–molecular weight product represents a product translated from a downstream ATG, as previously described (). Molecular weights were deduced from the amino acid sequences. Wt, wild-type.