Diabetes mellitus (DM) is a risk factor for cancer. The role of DM-induced hyperglycemic (HG) stress in blood cancer is poorly understood. Epidemiologic studies show that individuals with DM are more likely to have a higher rate of mutations in genes found in pre-leukemic hematopoietic stem and progenitor cells (pre-LHSPCs) including TET2. TET2-mutant pre-LHSPCs require additional hits to evolve into full-blown leukemia and/or an aggressive myeloproliferative neoplasm (MPN). Intrinsic mutations have been shown to cooperate with Tet2 to promote leukemic transformation. However, the extrinsic factors are poorly understood. Using a mouse model carrying Tet2 haploinsufficiency to mimic the human pre-LHSPC condition and HG stress, in the form of an Ins2Akita/+ mutation, which induces hyperglycemia and type 1 DM, we show that the compound mutant mice developed a lethal form of MPN and/or acute myeloid leukemia (AML). RNA-Seq revealed that this was due in part to upregulation of proinflammatory pathways, thereby generating a feed-forward loop, including expression of the antiapoptotic, long noncoding RNA (lncRNA) Morrbid. Loss of Morrbid in the compound mutants rescued the lethality and mitigated MPN/AML. We describe a mouse model for age-dependent MPN/AML and suggest that hyperglycemia acts as an environmental driver for myeloid neoplasms, which could be prevented by reducing expression levels of the inflammation-related lncRNA Morrbid.

The MPN/AML-like phenotype in compound mutants is largely driven by progressive inflammation and inflammatory cytokine–induced lncRNA . 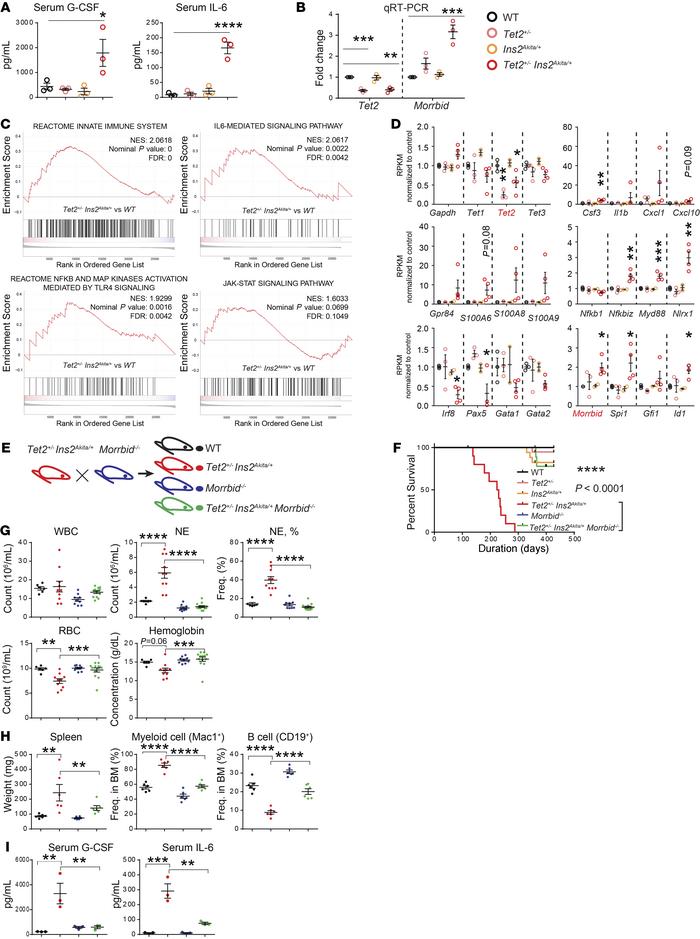 () Serological analysis of PB samples from various genotypes showed an increase in G-CSF and IL-6 in compound mutant mice. () qRT-PCR analysis was performed to detect the expression of and in lineage-negative cells from mice of various genotypes. () GSEA derived from RNA-Seq data set on lineage-negative BM cells from 4 groups of mice (6–8 month of age). Comparisons between and WT revealed significant changes in the innate immune pathway, the IL-6–mediated signaling pathway, and the TLR4/NF-κB signaling pathway. In addition, the JAK/STAT pathway demonstrated a trend toward upregulation in mice compared with WT. NES, normalized enrichment score. () Representative quantitative graphs of various innate immune response–related genes derived from the RNA-Seq data set, including the -targeting lncRNA (shown in the bottom right panel). () Schematic for the generation of triple-mutant mice along with WT, , and controls. () Loss of in compound mutants rescued the lethality associated with them compared with controls. A total of 9 mice were analyzed in the cohort, and 10 mice in each of the other cohorts. () Comparison of hematological values between and mice. () Splenomegaly and an aberrant myeloid cell/B cell imbalance in compound heterozygous mutants was reversed in mice. () Serum levels of G-CSF and IL-6. Mice in – were approximately 6–8 months old. = 2–13 mice. * < 0.05, ** < 0.01, *** < 0.001, and **** < 0.0001, by 1-way ANOVA (, , , and –). Data in were analyzed with GraphPad Prism 6, using the Kaplan-Meier survival package.