It is estimated that up to one in five individuals develop pituitary gland tumors. Despite the common occurrence of these tumors, the pathogenetic mechanisms underlying their development remain largely unknown. We report the identification of a novel pituitary tumor–derived, N-terminally truncated isoform of FGF receptor-4 (ptd-FGFR4). The corresponding mRNA results from alternative transcription initiation and encodes a polypeptide that lacks a signal peptide and the first two extracellular Ig-like domains. ptd-FGFR4 has a distinctive cytoplasmic residence, is constitutively phosphorylated, and is transforming in vitro and in vivo. Here we show that targeted expression of ptd-FGFR4, but not FGFR4, results in pituitary tumors that morphologically recapitulate the human disease. 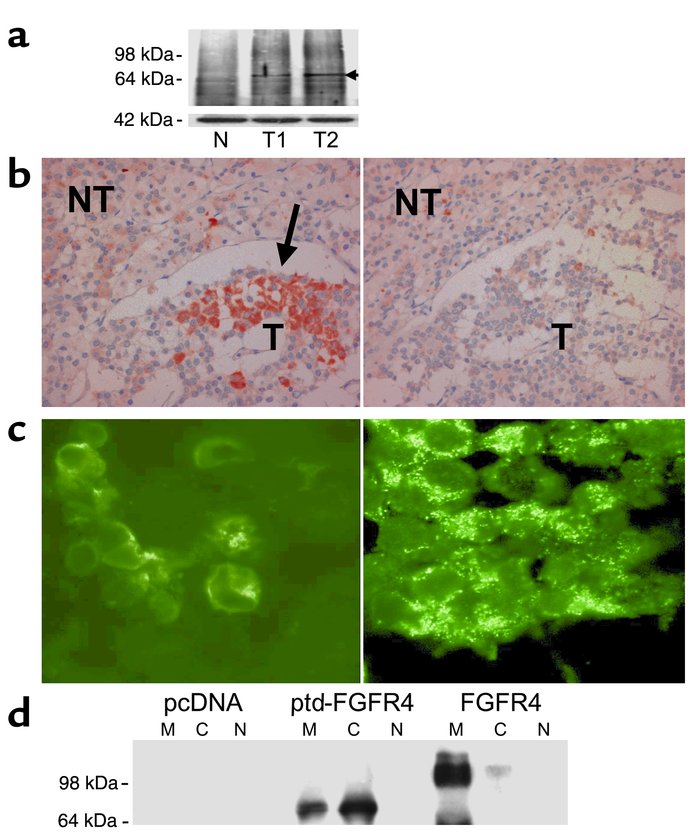 Characterization of ptd-FGFR4 protein. () Immunoprecipitation of normal and tumorous pituitary protein with anti-FGFR4, and immunoblotting with C-terminal anti-FGFR4, identifies no product at the size expected for full-length protein (approximately 110 kDa); instead there is a band that migrates at greater than 64 kDa that is found in tumor samples (T1 and T2), but not in normal pituitary samples (N). Equal amounts of protein that were immunoprecipitated and immunoblotted for actin are shown immediately below. () Immunohistochemical localization of FGFR4 reactivity in a human pituitary tumor. C-terminal FGFR4 immunoreactivity is seen in the cytoplasm of tumor (T) cells (arrow), including those infiltrating around adjacent nontumorous (NT) pituitary cells that are immunonegative (left); absorption of primary antibody eliminates reactivity (right), proving the specificity of the reaction. () Using confocal microscopy, cells transfected with full-length FGFR4 (left) exhibit strong membrane-specific localization of immunoreactivity and irregular nuclear membranes, a phenomenon known as membrane ruffling. In contrast, cells transfected with ptd-FGFR4 (right) exhibit a diffuse cytoplasmic staining pattern. () Transfected full-length FGFR4 is detected as a 110-kDa protein, predominantly in membrane fractions (M); transfected ptd-FGFR4 migrates at 65 kDa in cytoplasmic fractions (C) as well as in membrane fractions. Cells transfected with empty vector (pcDNA) are negative, and nuclear fractions (N) are negative.