Patients with nail-patella syndrome often suffer from a nephropathy, which ultimately results in chronic renal failure. The finding that this disease is caused by mutations in the transcription factor LMX1B, which in the kidney is expressed exclusively in podocytes, offers the opportunity for a better understanding of the renal pathogenesis. In our analysis of the nephropathy in nail-patella syndrome, we have made use of the Lmx1b knockout mouse. Transmission electron micrographs showed that glomerular development in general and the differentiation of podocytes in particular were severely impaired. The glomerular capillary network was poorly elaborated, fenestrae in the endothelial cells were largely missing, and the glomerular basement membrane was split. In addition podocytes retained a cuboidal shape and did not form foot processes and slit diaphragms. Expression of the α4 chain of collagen IV and of podocin was also severely reduced. Using gel shift assays, we demonstrated that LMX1B bound to two AT-rich sequences in the promoter region of NPHS2, the gene encoding podocin. Our results demonstrate that Lmx1b regulates important steps in glomerular development and establish a link between three hereditary kidney diseases: nail-patella syndrome (Lmx1b), steroid-resistant nephrotic syndrome (podocin), and Alport syndrome (collagen IV α4). 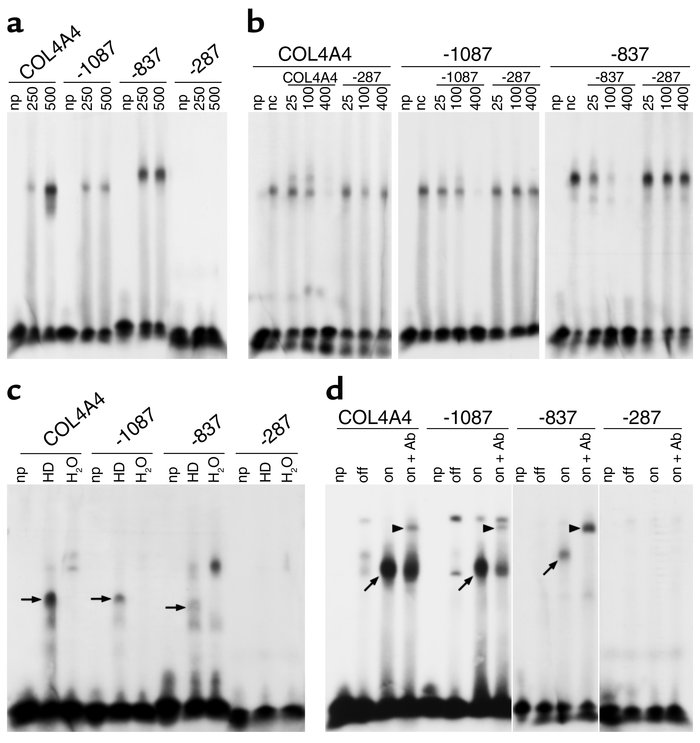