Atopic diseases such as allergy and asthma are characterized by increases in Th2 cells and serum IgE antibodies. The binding of allergens to IgE on mast cells triggers the release of several mediators, of which histamine is the most prevalent. Here we show that histamine, together with a maturation signal, acts directly upon immature dendritic cells (iDCs), profoundly altering their T cell polarizing capacity. We demonstrate that iDCs express two active histamine receptors, H1 and H2. Histamine did not significantly affect the LPS-driven maturation of iDCs with regard to phenotypic changes or capacity to prime naive T cells, but it dramatically altered the repertoire of cytokines and chemokines secreted by mature DCs. In particular, histamine, acting upon the H2 receptor for a short period of time, increased IL-10 production and reduced IL-12 secretion. As a result, histamine-matured DCs polarized naive CD4+ T cells toward a Th2 phenotype, as compared with DCs that had matured in the absence of histamine. We propose that the Th2 cells favor IgE production, leading to increased histamine secretion by mast cells, thus creating a positive feedback loop that could contribute to the severity of atopic diseases. 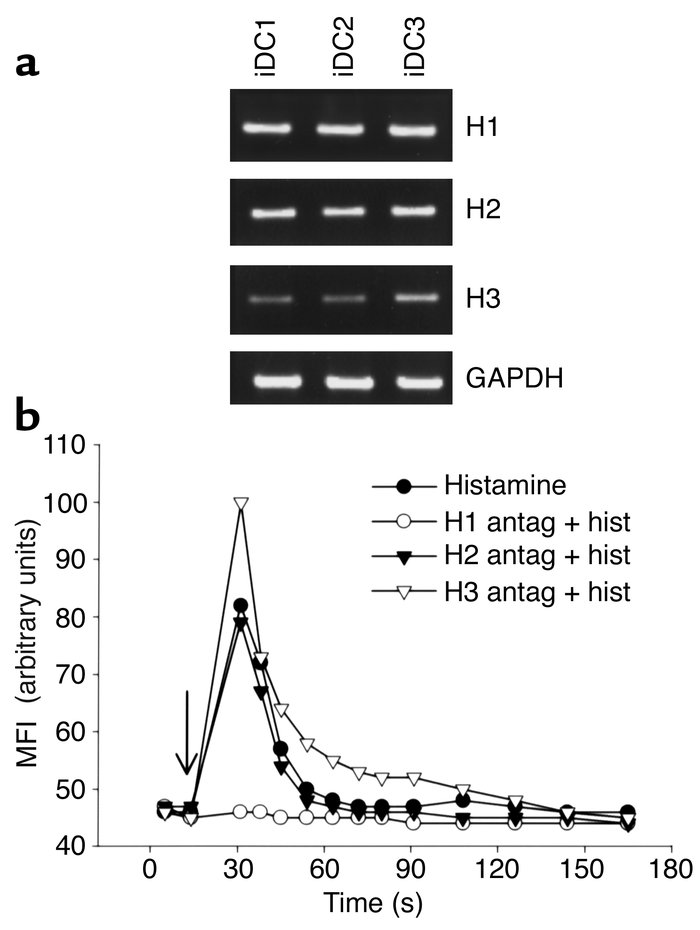 iDCs express three histamine receptors, and H1 is functionally active. () RT-PCR showing expression of histamine receptors H1, H2, and H3, and the GAPDH control in iDCs from three different donors. () Incubation of iDCs with histamine causes an increase in intracellular calcium that is blocked by an H1-specific antagonist. Fluo-3–loaded iDCs were preincubated at 0°C for 30 minutes with the indicated histamine receptor antagonist, warmed at 37°C for 1 minute, and at the time indicated by the arrow, stimulated with 10 μM histamine. Similar data were obtained with iDCs from two other donors. Antag, antagonist; Hist, histamine; MFI, mean fluorescence intensity.