Selective deletion of leptin receptor in neurons leads to obesity

Selective deletion of leptin receptor in neurons leads to obesity

Animals with mutations in the leptin receptor (ObR) exhibit an obese phenotype that is indistinguishable from that of leptin deficient ob/ob mice. ObR is expressed in many tissues, including brain, and the relative importance of leptin’s effects on central versus peripheral sites has not been resolved. To address this, we generated mice with neuron-specific (ObRSynIKO) and hepatocyte-specific (ObRAlbKO) disruption of ObR. Among the ObRSynIKO mice, the extent of obesity was negatively correlated with the level of ObR in hypothalamus and those animals with the lowest levels of ObR exhibited an obese phenotype. The obese mice with low levels of hypothalamic ObR also show elevated plasma levels of leptin, glucose, insulin, and corticosterone. The hypothalamic levels of agouti-related protein and neuropeptide Y RNA are increased in these mice. These data indicate that leptin has direct effects on neurons and that a significant proportion, or perhaps the majority, of its weight-reducing effects are the result of its actions on brain. To explore possible direct effects of leptin on a peripheral tissue, we also characterized ObRAlbKO mice. These mice weigh the same as controls and have no alterations in body composition. Moreover, while db/db mice and ObRSynIKO mice have enlarged fatty livers, ObRAlbKO mice do not. In summary, these data suggest that the brain is a direct target for the weight-reducing and neuroendocrine effects of leptin and that the liver abnormalities of db/db mice are secondary to defective leptin signaling in the brain. 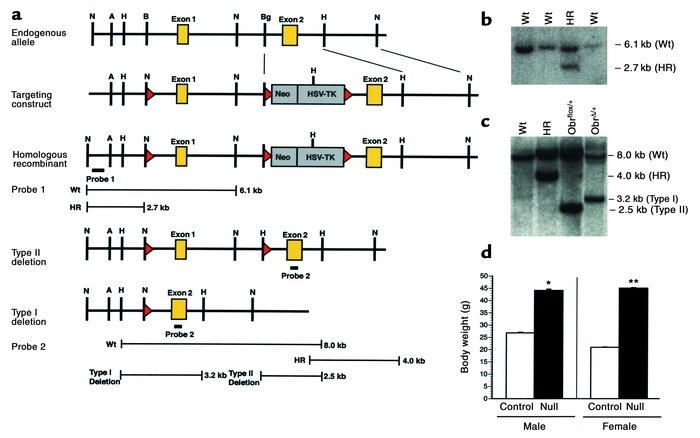 LoxP targeting of the ObR locus. Gene targeting was used to insert loxP sites on either side of the first coding exon of ObR. () Restriction maps (from top to bottom) of the genomic locus, targeting vector, homologous recombinant, and the type II and type I deletion alleles. Probe 1, located outside the targeting construct, was used to screen for homologous recombinants. Probe 2, located in the second coding exon, distinguishes the endogenous allele, homologous recombinants, and type I (deletion of the first coding exon) and II (deletion of the targeting cassette leaving loxP sites on either side of the first coding exon) deletions. A, AflII; B, BamHI; Bg, BglII; H, HindIII; N, NcoI. () Southern blot analysis of NcoI-digested genomic DNA from ES cell clones using probe 1. The endogenous allele (Wt) and homologous recombinants (HR) migrated at the predicted sizes. () Southern blot analysis of Hind-III digested genomic DNA using probe 2. The endogenous allele (Wt), homologous recombinant (HR), and type II deletion were detected from ES cell DNA. ObRflox/+ mice were generated from the type II deletion and crossed to adenovirus EIIA-Cre mice. The type I deletion was detected in tail DNA from progeny derived from this cross. All alleles migrated at the predicted sizes. () Body weight at 8 weeks of age of ObRΔ/Δ and littermate control (ObRΔ/+) mice. Data represent the mean ± SEM of at least nine animals of each genotype and gender. * < 0.02; ** < 0.001; unpaired Student’s test.