RANK, the receptor activator of NF-κB, and its ligand RANKL (initially termed TRANCE, also termed ODF and OPGL), are a TNF superfamily receptor-ligand pair that govern the development and function of osteoclasts, lymphoid tissue, and mammary epithelium. While TNF family cytokines share a common structural scaffold, individual receptor-ligand pairs associate with high specificity. Given the low level of amino acid conservation among members of the TNF superfamily, the means by which these molecules achieve specificity cannot be completely understood without knowledge of their three-dimensional structures. To determine the elements of RANKL that mediate RANK activation, we have crystallized the ectodomain of murine RANKL and solved its structure to a resolution of 2.6 Å. RANKL self-associates as a homotrimer with four unique surface loops that distinguish it from other TNF family cytokines. Mutagenesis of selected residues in these loops significantly modulates RANK activation, as evidenced by in vitro osteoclastogenesis, thereby establishing their necessity in mediating the biological activities of RANKL. Such structural determinants of RANKL-RANK specificity may be of relevance in the pharmacologic design of compounds to ameliorate osteopenic disorders of bone. 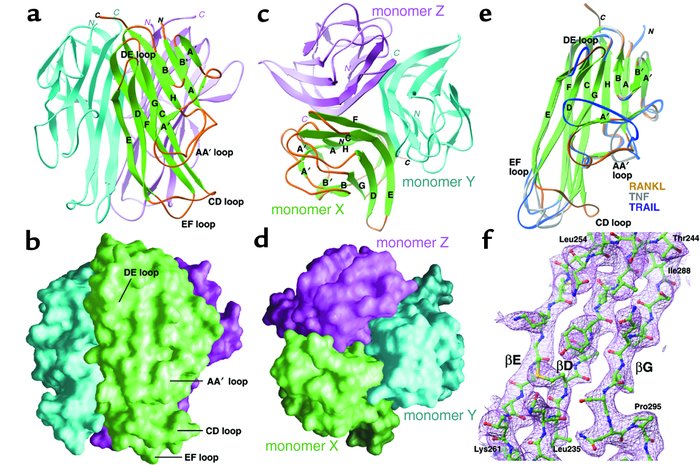 Crystal structure of RANKL. () Ribbon diagram of the RANKL trimer, shown with the β-strands (green) and connecting loops (orange) of one RANKL monomer labeled according to standard TNF-β–sandwich nomenclature. The other two RANKL monomers are cyan and magenta, respectively. () In this view, oriented identically to , the RANKL transmembrane stalk projects to the top of the image, while the membrane-distal region is toward the bottom. The homotrimer exhibits the shape of a truncated pyramid, being slightly wider at the membrane-proximal end. () Ribbon diagram of the RANKL trimer viewed down the axis of threefold symmetry, oriented with the membrane-distal face forward. The secondary structure of monomer X is labeled as in . () The RANKL trimer, shown with the molecular surfaces of monomers X, Y, and Z colored in green, cyan, and magenta, respectively. The orientation of the molecule is identical to that in . () Comparison of a single RANKL monomer with those of TNF and TRAIL. The β-strands of all three structures are colored green, while the connecting loops are colored orange for RANKL, gray for TNF (PDB code 1tnr), and blue for TRAIL (PDB code 1d4v). When the structures of these proteins are superimposed, it is apparent that the β-strands of RANKL superimpose almost identically with those of TNF and TRAIL. In contrast, the AA′′, CD, EF, and DE loops of RANKL exhibit unique topology when compared with those of other TNF family cytokines. () Electron density of the E-D-G β-strands. The structure is viewed from the solvent-accessible surface of the RANKL monomer, with an orientation similar to (). Displayed in magenta is a 2.6-Å composite omit map (contoured at 1.2 ς) with the RANKL structure depicted in green (carbon), red (oxygen), blue (nitrogen), and yellow (sulfur).