The phosphoinositide 3-kinase–Akt/PKB pathway mediates the mitogenic effects various nutrients and growth factors in cultured cells. To study its effects in vivo in pancreatic islet β cells, we created transgenic mice that expressed a constitutively active Akt1/PKBα linked to an Insulin gene promoter. Transgenic mice exhibited a grossly visible increase in islet mass, largely due to proliferation of insulin-containing β cells. Morphometric analysis verified a six-fold increase in β cell mass/pancreas, a two-fold increase in 5-bromo-2′-deoxyuridine incorporation, a four-fold increase in the number of β cells per pancreas area, and a two-fold increase in cell size in transgenic compared with wild-type mice at 5 weeks. At least part of the increase in β cell number may be accounted for by neogenesis, defined by criteria that include β cells proliferating from ductular epithelium, and by a six-fold increase in the number of single and doublet β cells scattered throughout the exocrine pancreas of the transgenic mice. Glucose tolerance was improved, and fasting as well as fed insulin was greater compared with wild-type mice. Glucose-stimulated insulin secretion was maintained in transgenic mice, which were resistant to streptozotocin–induced diabetes. We conclude that activation of the Akt1/PKBα pathway affects islet β cell mass by alteration of size and number. 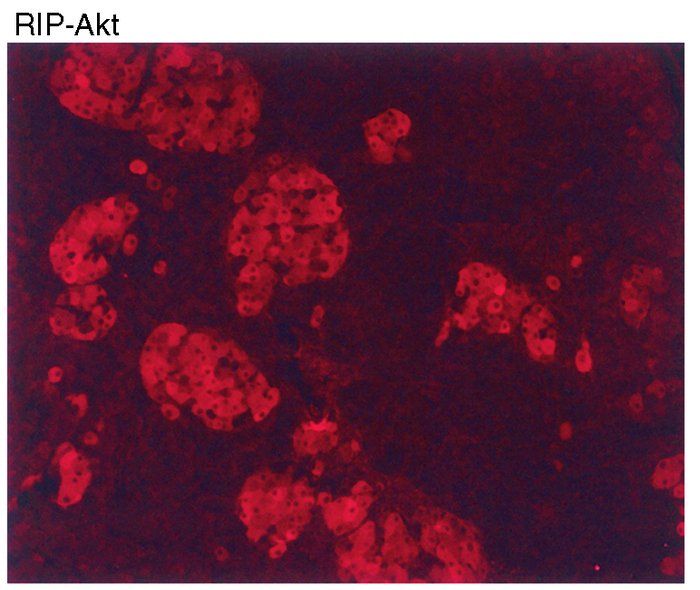 Transgene expression in RIP-Akt mice. Expression of the transgene was demonstrated by immunofluorescent staining of the pancreas with an anti–HA-tag Ab (red). No signal was observed in pancreas from a control animal (data not shown).