BACKGROUND Given the heightened tolerance to self-starvation in anorexia nervosa (AN), a hypothalamic dysregulation of energy and glucose homeostasis has been hypothesized. Therefore, we investigated whether hypothalamic reactivity to glucose metabolism is impaired in AN.METHODS Twenty-four participants with AN, 28 normal-weight participants, and 24 healthy participants with obesity underwent 2 MRI sessions in a single-blind, randomized, case-controlled crossover study. We used an intragastric infusion of glucose and water to bypass the cephalic phase of food intake. The responsivity of the hypothalamus and the crosstalk of the hypothalamus with reward-related brain regions were investigated using high-resolution MRI.RESULTS Normal-weight control participants displayed the expected glucose-induced deactivation of hypothalamic activation, whereas patients with AN and participants with obesity showed blunted hypothalamic reactivity. Furthermore, patients with AN displayed blunted reactivity in the nucleus accumbens and amygdala. Compared with the normal-weight participants and control participants with obesity, the patients with AN failed to show functional connectivity between the hypothalamus and the reward-related brain regions during water infusion relative to glucose infusion. Finally, the patients with AN displayed typical baseline levels of peripheral appetite hormones during a negative energy balance.CONCLUSION These results indicate that blunted hypothalamic glucose reactivity might be related to the pathophysiology of AN. This study provides insights for future research, as it is an extended perspective of the traditional primary nonhomeostatic understanding of the disease.FUNDING This study was supported by a grant from the DFG (SI 2087/2-1).

Differences between groups in BOLD signal response during glucose infusion. 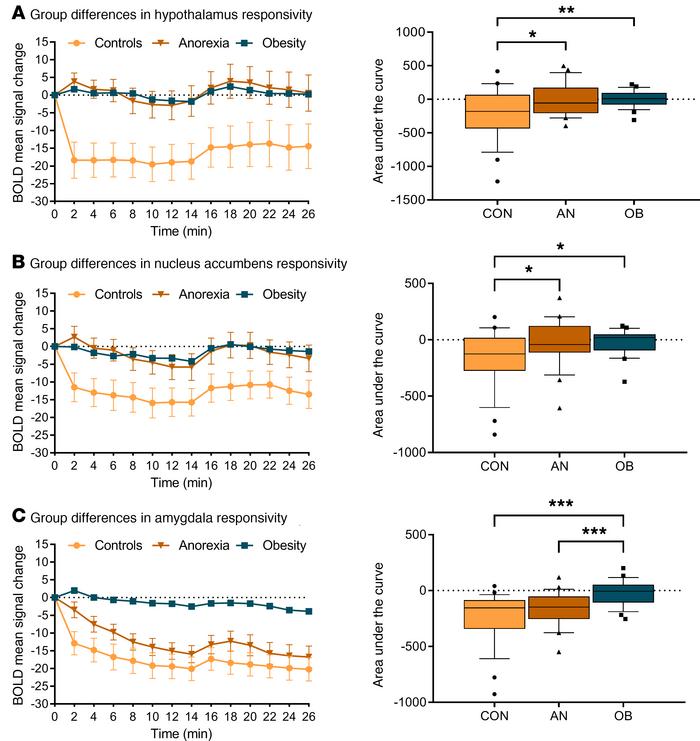