Toxoplasma gondii is an incredibly successful parasite owing in part to its ability to persist within cells for the life of the host. Remarkably, at least 350 host species of T. gondii have been described to date, and it is estimated that 30% of the global human population is chronically infected. The importance of T. gondii in human health was made clear with the first reports of congenital toxoplasmosis in the 1940s. However, the AIDS crisis in the 1980s revealed the prevalence of chronic infection, as patients presented with reactivated chronic toxoplasmosis, underscoring the importance of an intact immune system for parasite control. In the last 40 years, there has been tremendous progress toward understanding the biology of T. gondii infection using rodent models, human cell experimental systems, and clinical data. However, there are still major holes in our understanding of T. gondii biology, including the genes controlling parasite development, the mechanisms of cell-intrinsic immunity to T. gondii in the brain and muscle, and the long-term effects of infection on host homeostasis. The need to better understand the biology of chronic infection is underscored by the recent rise in ocular disease associated with emerging haplotypes of T. gondii and our lack of effective treatments to sterilize chronic infection. This Review discusses the cell types and molecular mediators, both host and parasite, that facilitate persistent T. gondii infection. We highlight the consequences of chronic infection for tissue-specific pathology and identify open questions in this area of host-Toxoplasma interactions.

Innate immune signaling and the influence of parasite effectors. 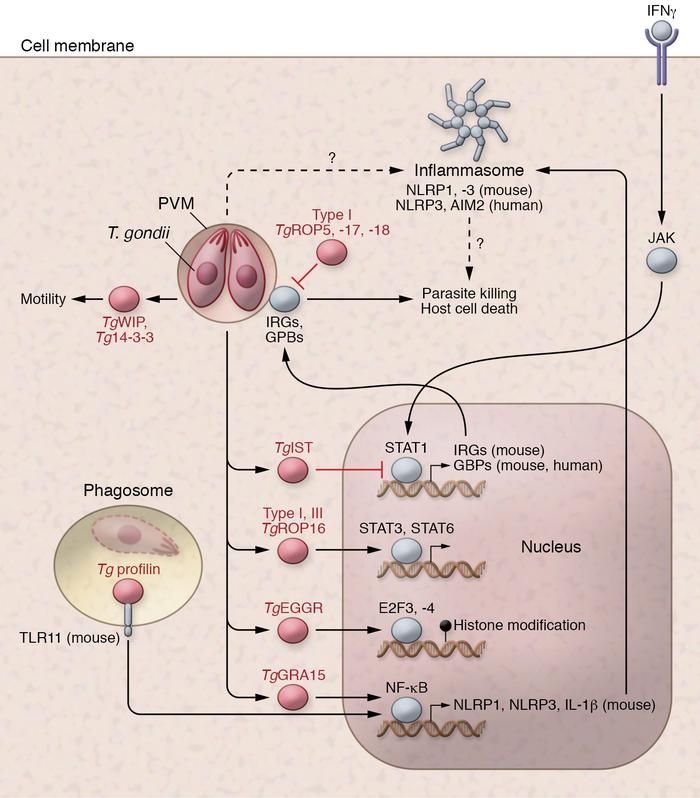 grows within a parasitophorous vacuole membrane (PVM) that protects the parasite from cytosolic immune sensors and avoids fusion with the endolysosomal compartments containing Toll-like receptors (TLRs). In the mouse, TLR11 recognizes profilin, an actin-modifying protein that is exposed once dead or damaged parasites are phagocytosed. TLR11 is a pseudogene in humans. GRA15 can promote host NF-κB phosphorylation and nuclear translocation. In mice, NF-κB stimulation is necessary for transcriptional regulation of the inflammasome components NLRP1, NLRP3, and IL-1; however, human monocytes can engage an NLRP3 inflammasome independent of NF-κB prestimulation. A detailed mechanism of inflammasome activation, parasite killing, and host cell death remains elusive, particularly in regard to signal integration with IFN-γ. IFN-γ signaling induces STAT1 translocation to the nucleus and upregulation of IFN-responsive genes, including immunity-related GTPases (IRGs, mouse) and guanylate-binding proteins (GBPs, human and mouse), which functions to attack parasite vacuole, leading to parasite killing and host cell death. In human cells, GBP1 is necessary for this process, which leads to AIM2 activation of an alternative apoptosis pathway. The type I parasite rhoptry proteins, ROP5, 17, and 18, can dismantle the function of the mouse IRGs IRGa6 and IRGb6 at the PVM, inactivating GBP attack and parasite killing. The parasite dense granule effector IST is a nuclear repressor of STAT1 transcription. ROP16 is a kinase that phosphorylates and activates host STAT3 and STAT6. EGGR affects host gene expression through E2F3- and E2F4-mediated epigenetic modifications. In infected monocytes and dendritic cells (DCs), WIP and 14-3-3 proteins promote cell mobility, a putative mechanism of intracellular parasite dissemination in vivo.