Hemochromatosis is a progressive iron overload disorder that is prevalent among individuals of European descent. It is usually inherited in an autosomal-recessive pattern and associated with missense mutations in HFE, an atypical major histocompatibility class I gene. Recently, we described a large family with autosomal-dominant hemochromatosis not linked to HFE and distinguished by early iron accumulation in reticuloendothelial cells. Through analysis of a large pedigree, we have determined that this disease maps to 2q32. The gene encoding ferroportin (SLC11A3), a transmembrane iron export protein, lies within a candidate interval defined by highly significant lod scores. We show that the iron-loading phenotype in autosomal-dominant hemochromatosis is associated with a nonconservative missense mutation in the ferroportin gene. This missense mutation, converting alanine to aspartic acid at residue 77 (A77D), was not seen in samples from 100 unaffected control individuals. We propose that partial loss of ferroportin function leads to an imbalance in iron distribution and a consequent increase in tissue iron accumulation. 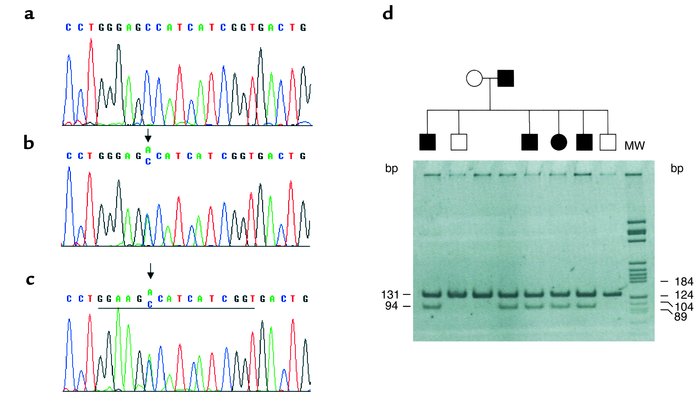 Mutation detection. (&ndash;) Sequencing chromatographs of the forward sequence of exon 3 spanning the GCC&rarr;GAC mutation (A77D) substitution are compared for a normal control () and two patients ( and ). The mutation is indicated by an arrow. The sequence of the mismatched primer used to introduce an informative restriction site for MboII into the mutated allele is also indicated. The primer contains an A&rarr;G substitution, which, in the presence of the mutation, creates a novel GAAGA recognition site for MboII. () Segregation of the A77D mutation, introduction of the MboII site into mutant alleles, and restriction digestion with MboII. The information is from individuals II-9, II-10, III-21, III-22, III-24, III-26, III-27, and III-28. Normally, one fragment is obtained (131 bp). The amplification product from the mutant allele contains the novel MboII site resulting in cleavage into 37- and 94-bp fragments. The 37-bp fragment has run off the bottom of the gel.