PD-1 expression is a hallmark of both early antigen-specific T cell activation and later chronic stimulation, suggesting key roles in both naive T cell priming and memory T cell responses. Although significant similarities exist between T cells and NK cells, there are critical differences in their biology and functions reflecting their respective adaptive and innate immune effector functions. Expression of PD-1 on NK cells is controversial despite rapid incorporation into clinical cancer trials. Our objective was to stringently and comprehensively assess expression of PD-1 on both mouse and human NK cells under multiple conditions and using a variety of readouts. We evaluated NK cells from primary human tumor samples, after ex vivo culturing, and from multiple mouse tumor and viral models using flow cytometry, quantitative reverse-transcriptase PCR (qRT-PCR), and RNA-Seq for PD-1 expression. We demonstrate that, under multiple conditions, human and mouse NK cells consistently lack PD-1 expression despite the marked upregulation of other activation/regulatory markers, such as TIGIT. This was in marked contrast to T cells, which were far more prominent within all tumors and expressed PD-1. These data have important implications when attempting to discern NK from T cell effects and to determine whether PD-1 targeting can be expected to have direct effects on NK cell functions. 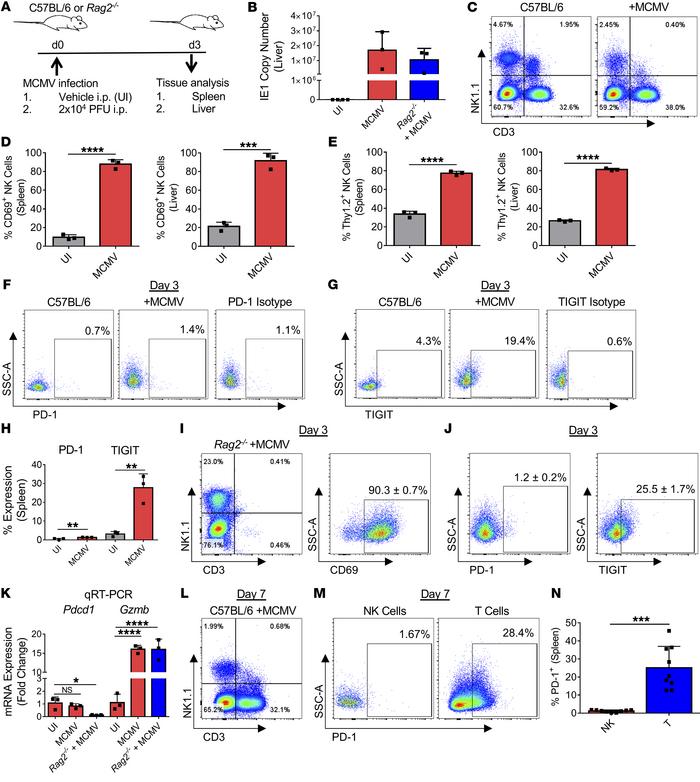 () WT C57BL/6 and mice were infected with 2 × 104 PFU MCMV. () At 72 hours, viral titers were elevated in the liver. () Representative parent gating from spleens of mice shows NK (CD3–NK1.1+) and T (CD3+NK1.1–) cell populations. NK cells were further gated on NKp46+ and compared with those of uninfected mice. MCMV-infected mice had significant upregulation of () CD69 and () Thy1.2 on NK cells in the spleen and liver at 3 days after infection. () PD-1 expression on NK cells in WT mice remained minimal, while () TIGIT was upregulated. () Though minimal (1%–2% increase), the measured increase in PD-1 was statistically significant, while TIGIT was upregulated by 15% to 25% under identical conditions. () Parent gating of splenocytes from acute MCMV infection in mice shows marked upregulation of CD69, while () PD-1 was minimal and TIGIT upregulation significant. () PD-1 mRNA expression on MCMV-infected splenocytes was minimal compared with uninfected WT splenocytes, while both infected groups exhibited marked upregulation of granzyme B. () At day 7 after infection, () PD-1 expression on T cells was upregulated, while NK expression of PD-1 remained minimal. () Summary data of PD-1 expression on NK and T cells at 5 to 7 days after infection. Data are shown as mean ± SD for = 3 mice/group and are representative of 3 independent experiments (, , , , and ). Data are shown as mean ± SD for = 2–3 mice/group, showing results from 4 independent experiments using 1 to 2 × 104 PFU MCMV (). < 0.01; < 0.001; < 0.0001, unpaired Student’s test (, , and ) and 1-way ANOVA compared with uninfected splenocytes ().