Peroxisome proliferator–activated receptor-γ (PPARγ) controls adipogenesis and glucose metabolism. It was reported recently that PPARγ activation by its agonistic ligands modifies lymphocyte function. Since synthetic ligands are known to exert their effect via PPARγ-dependent and -independent pathways, we examined the physiological role of PPARγ in lymphocytes by using heterozygote mutant mice in which one allele of PPARγ is deleted (PPARγ+/–). In contrast to T cells, which did not exhibit a significant difference, B cells from PPARγ+/– showed an enhanced proliferative response to stimulation by either lipopolysaccharide or cross-linking of antigen receptors. Dysregulation of the NF-κB pathway in B cells from PPARγ+/– was indicated by spontaneous NF-κB activation, as well as increased IκBα phosphorylation and gel-shift activity following LPS stimulation. Mice primed with either ovalbumin or methylated BSA also showed enhanced antigen-specific immune response of both T and B cells, an immunological abnormality that exacerbated antigen-induced arthritis. These findings indicate that PPARγ plays a critical role in the control of B cell response and imply a role in diseases in which B cell hyperreactivity is involved, such as arthritis and autoimmunity. 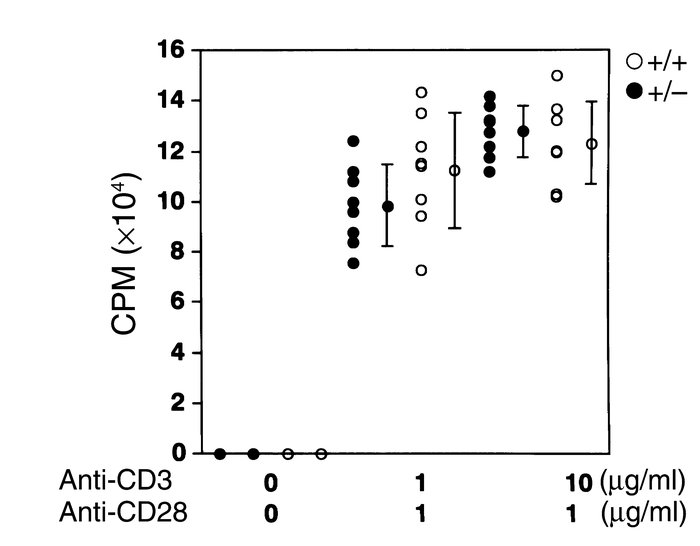 Proliferative response of naive T cells from PPARγ+/– mice does not differ from wild-type mice. T cells were purified from the spleen of each naive mouse and stimulated with 1 or 10 μg/ml of anti-CD3 Ab in the presence of 1 μg/ml of anti-CD28 Ab for 24 hours. The proliferation was measured by [3H]thymidine incorporation. Bars show the mean ± SD ( = 8 per group). Data from every littermate group of PPARγ+/– and PPARγ+/+ mice were statistically analyzed. There was no significant difference in the naive T cell response between the PPARγ+/– mice (filled circles, +/–) and the littermate ICR (open circles, +/+) wild-type mice.