Foxp3+ Tregs are key to immune homeostasis, but the contributions of various large, multiprotein complexes that regulate gene expression remain unexplored. We analyzed the role in Tregs of the evolutionarily conserved CoREST complex, consisting of a scaffolding protein, Rcor1 or Rcor2, plus Hdac1 or Hdac2 and Lsd1 enzymes. Rcor1, Rcor2, and Lsd1 were physically associated with Foxp3, and mice with conditional deletion of Rcor1 in Foxp3+ Tregs had decreased proportions of Tregs in peripheral lymphoid tissues and increased Treg expression of IL-2 and IFN-γ compared with what was found in WT cells. Mice with conditional deletion of the gene encoding Rcor1 in their Tregs had reduced suppression of homeostatic proliferation, inability to maintain long-term allograft survival despite costimulation blockade, and enhanced antitumor immunity in syngeneic models. Comparable findings were seen in WT mice treated with CoREST complex bivalent inhibitors, which also altered the phenotype of human Tregs and impaired their suppressive function. Our data point to the potential for therapeutic modulation of Treg functions by pharmacologic targeting of enzymatic components of the CoREST complex and contribute to an understanding of the biochemical and molecular mechanisms by which Foxp3 represses large gene sets and maintains the unique properties of this key immune cell. 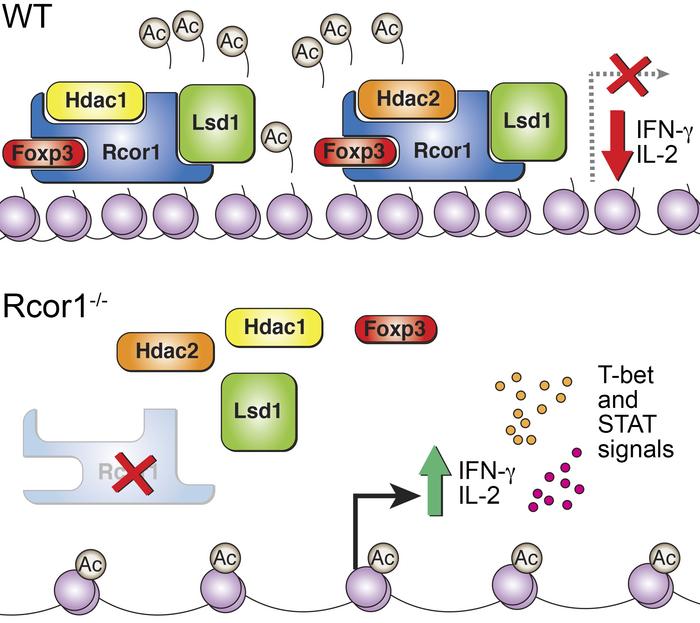