Find articles by Berglund, A. in: JCI | PubMed | Google Scholar |

Find articles by Hamaidi, I. in: JCI | PubMed | Google Scholar 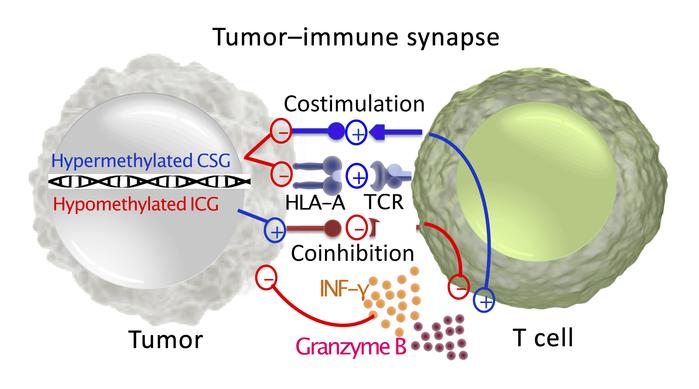 Unprecedented clinical success with immune checkpoint inhibitors alludes to the pivotal importance of the immune synapse that forms between the antigen-presenting cells and effector T cells (1). Professional antigen-presenting cells such as dendritic cells present tumor-associated antigens via human leukocyte antigen complex (HLA) to the cognate T cells to elicit tumor-specific immune responses (2). This high-fidelity recognition of tumor antigens by effector T cells is either augmented by concomitant interaction of costimulatory molecules leading to a functional immune response, or interrupted by engagement of immune checkpoint molecules mediating T cell anergy or exhaustion (2).

Although professional antigen-presenting cells are deemed critical for elicitation of a competent immune response, the immune synapse also forms between the tumor and the effector T cells; thus, the tumor cells may evade the effector T cells by neutralizing this interaction. In fact, the interaction between tumor cells and immune cells may shape the immunosuppressive landscape within the tumor microenvironment via mechanisms involved in downregulation of expression of both HLA and a wide array of immune checkpoint and costimulatory ligands to modulate T cell responses (3). Indeed, the role of the tumor in the immune synapse is best illustrated by a tendency toward superior efficacy of PD1-blocking antibodies against tumors expressing high levels of PD-L1 (4).

Tumor evolution to evade immune surveillance is a hallmark of carcinogenesis, and modulation of the immune synapse between antigen-presenting cells and effector T cells directly affects tumor-specific immunity. Because antigen-presenting cells and tumors modulate effector T cells via ligands for costimulatory and immune checkpoint pathways, we focused on the methylation status of these ligands in tumors (Figure 1A). The Cancer Genome Atlas (TCGA) Level 1 methylation data from 30 solid tumor types were studied (Supplemental Table 1; supplemental material available online with this article; https://doi.org/10.1172/JCI131234DS1). Twenty selected genes were divided into 2 groups: immune checkpoint genes (ICGs) and costimulatory genes (CSGs) (Supplemental Table 2). Of note, CD80 and CD86 have dual roles as stimulatory when interacting with CD28 or inhibitory as a ligand for CTLA-4. Prior studies suggest that their affinity is stronger for CTLA-4 and are thus likely to mediate inhibitory signals when expressed at low levels, as is generally the case in tumors (8). Therefore, these 2 genes were categorized as inhibitory genes in the tumor-immune synapse.

We first investigated whether distinct tumor types were identifiable based on the methylation status of the immune synapse genes using 2-dimensional t-distributed stochastic neighbor embedding (t-SNE) (9) and unbiased hierarchical clustering analysis. Strikingly, patients with the same tumor type clustered together regardless of other clinical characteristics including age, sex, or stage (Figure 1, B–D). This finding suggests the methylation status of immune synapse genes is heavily imprinted by the tissue of origin. By contrast, normal adjacent tissue of the same histology differentially segregated within the cluster, highlighting the epigenetic evolution of tumors during carcinogenesis (Figure 1, B–D). For instance, breast cancer (inverted pink triangle) is clearly separated from its counterpart normal adjacent tissue.

The polarity of methylation patterns for costimulatory and immune checkpoint ligands. (A and B) β Values of methylation probes for TSS1500, TSS200, 5′UTR, body, and 3′UTR of the HHLA2 gene (A), an example of an ICG, or CD40 (B), an example of a CSG, derived from all tumor samples (blue) and normal adjacent tissues (red) are depicted. The methylation level for each probe is represented by a box plot. The left-most column indicates the presence of CpG islands, while the second-column colors indicate where on the gene the probe is located. The average β values for selected probes within TSS1500, TSS200, and 5′UTR are plotted against gene expression for HHLA2 (C) or CD40 (D). Each marker represents an individual tissue sample. (E) A box plot of average β values for selected probes for HHLA2 and CD40 from tumor (blue) and normal adjacent tissue (red) is shown. rP and rS are Pearson’s and Spearman’s correlation coefficients, respectively.

These results suggest that the tumor-immune synapse is regulated at least in part by methylation in cancer. Sporadic evidence for regulation of HLA (11, 12), CD40 (5), or CD80 (13) by methylation in select tumor types now appears to be a more generalized phenomenon in the majority of CSGs and ICGs across tumor types. Interestingly, consistent with previous reports of PD-L1 promoter regulation by methylation (14), 2 probes within the promoter region were negatively correlated with the gene expression. However, a clear trend for hypomethylation of the PD-L1 locus in comparison with normal adjacent tissue was not observed, suggesting competing mechanisms governing PD-L1 expression (Supplemental Figure 4).

Next, we conducted a principal component analysis (PCA) to summarize the methylation pattern across all genes and their CpG probes. To minimize noise and enrich for biologically relevant signal, only the CSG and ICG CpG probes that demonstrated negative correlation (r < –0.2) between the methylation status and their corresponding gene expression and located in the TSS1500, TSS200, and 5′UTR regions were selected for further analysis: in total 75 probes (Figure 2, Supplemental Figures 1–16, and Supplemental Tables 3 and 4). PCA revealed 2 major principal components, explaining 22.6% and 16.6% of the variation, respectively. A 2-dimensional representation of PC1 and PC2 for 8,186 solid tumors and 745 normal adjacent tissues clearly showed that many tumors have an abnormal methylation pattern (Figure 3A). Strikingly, the dominant components of PC1 were CSGs, in particular CD40 and HLA-A. By contrast, PC2 was mainly driven by ICGs including VTCN1, HHLA2, PDL1, CEACAM1, CD80, and CD86 (Figure 3B and Supplemental Figure 17). Consequently, PC1 and PC2 were highly correlated with average β values of CSG probes and ICG probes, respectively (Supplemental Figure 17, A and B). Probes from the same gene generally clustered together, further confirming the robustness of this analysis (Figure 3B). It should be noted that all CpG probes contribute to both PCA components with variable contributions, some with a negative weight for a specific PCA component. The total score for a sample will thus be a weighted average of all variables. Consistent with the methylation patterns observed with individual CSGs and ICGs, primary tumors exhibited higher PC1 and lower PC2 scores in comparison with the normal adjacent tissue score across disease sites (Figure 3C), which was also replicated in the average β values of CSG and ICG probes (Supplemental Figure 17, D and E). Importantly, we observed reversal of hypermethylation of CSGs by 5-azacytidine in the data set of 26 epithelial cancer cell lines (15), with a significant decrease in PC1 scores (Figure 3D). At an individual gene level, demethylation of CD40 by 5-azacytidine was also evident (Figure 3E), underscoring the notion that the methylation status of CSGs is therapeutically actionable.

Because immune evasion is critical for cancer progression and survival, we hypothesized that the differential methylation status of the immune synapse genes may determine clinical outcome. Therefore, we investigated the clinical relevance of our PCA model in melanoma, a prototypic immunogenic cancer. PC1 was a determinant of disease-specific survival (DSS) in melanoma, with significant survival advantage in PC1Low patients characterized by hypomethylation of CSGs (Figure 4A). An alternative approach with partial least squares (PLS) modeling using the outcome as response variable also confirmed differences in survival outcome based on CSGs (Supplemental Figure 18). Interestingly, the PC1 score was relatively consistent among early- and late-stage melanoma patients, and thus, the survival difference was independent of patient staging (Figure 4B).

The methylation status of immune synapse genes was prognostic only in immunogenic tumors, suggesting that modulation of the tumor-immune synapse by methylation may become clinically relevant only in the presence of active antitumor immune responses. For instance, PC1 was prognostic for DSS in uterine corpus endometrial carcinoma (UCEC) with microsatellite instability (MSIHigh) (Figure 4C). By contrast, no differences in survival were noted based on PC1 in UCEC without MSI (WT) (Figure 4D). Consistently, the methylation status correlated with overall survival (OS) and DSS in other relatively immunogenic cancers, including non–small cell lung cancer (NSCLC), renal cell carcinoma (RCC), and head and neck cancer (HNSC). Similar to our findings with melanoma, NSCLC patients with lower PC1 scores demonstrated improved survival (Supplemental Figure 19). By contrast, prognosis for HNSC and RCC correlated with PC2 (Supplemental Figure 20).

In summary, we report methylation of immune synapse genes as a crucial driver of tolerogenic immune landscapes in cancer. Notably, preclinical studies have demonstrated the efficacy of demethylating agents to augment immunotherapy (17, 18). Based on our study, we predict that the subset of patients with hypermethylated CSGs (PC1High) may benefit from combination therapy of PD1 blockade with 5-azacitidine, while conversely, patients with hypermethylated ICGs (PC2High) may be adversely impacted. Given negative preliminary findings from the phase II randomized clinical trial of oral 5-azacitidine plus pembrolizumab versus pembrolizumab plus placebo (19), patient selection may be crucial to overcome resistance to PD1 blockade. Alternatively, targeted editing of tumor methylation of immune synapse genes by TET1 or DNMT3a via CRISPR may allow personalized approaches to augment immunotherapy (20). Notably, the methylation status of immune synapse genes may be utilized to predict response to immunotherapy. The major advantage to the use of the methylation status is that DNA is stable and degradation is less likely in formalin-fixed paraffin-embedded tissues, and thus anticipated to be more robust than RNA-based or histology-based approaches.

Analysis of TCGA methylation database. TCGA Level 1 IDAT files for the selected tumor types were downloaded between April and May of 2016 using the former (now defunct) Data Matrix accessed through http://tcga-data.nci.nih.gov/tcga/dataAccessMatrix.htm Preprocessing the data included normalization via internal control probes followed by background subtraction using the methylumi R package from Bioconductor (21). The calculated β values were then extracted from the MethyLumiSet object following preprocessing.

Analysis of TCGA RNA-Seq database. The TCGA RNA-Seq samples were extracted from the EBPlusPlusAdjustPANCAN_IlluminaHiSeq_RNASeqV2.geneExp.tsv file available from: https://gdc.cancer.gov/about-data/publications/pancanatlas and log2 transformed: log2(x + 1).

t-SNE analysis. t-SNE was calculated using all 247 probes for the selected 20 genes across all TCGA samples. The 50 first PCA components were used as input, with perplexity = 50 and Euclidian distance as implemented in MATLAB.

PCA. We used the first and second principal components (a weighted average of β values among the CSG and ICG probes), as they account for the largest variability in the data, to represent the overall methylation status for 8,931 tumor and normal samples in the TCGA database. That is, PC = Σwixi, a weighted average of β values among the selected CSG and ICG probes, where xi represents the gene i β value, wi is the corresponding weight (loading coefficient), with Σwi2 = 1, and the wi values maximize the variance of Σwixi. For each gene, a set of probes was selected using the following criteria to minimize noise: r < –0.2 (methylation vs. gene expression) located in the TSS1500, TSS200 or the 5′UTR (Supplemental Table 4). Each probe was centered but not scaled before PCA calculations.

Survival analysis. OS and DSS data were retrieved from a prior publication (22). Tertiles were used to define high, intermediate (Int), and low PC1 or PC2 for melanoma, NSCLC, HNSC, RCC, UCEC MSIHigh, and WT patients. Kaplan-Meier curves were then plotted based on tertile scores.

PLS modeling. A PLS model was derived using melanoma patients with poor survival (DSS dead < 12 months, 0) and long survival (DSS alive > 120 months, 1) as a binary response using the CSG probes. Cross validation indicated 2 significant PLS components. The PLS model was then applied to the melanoma samples not used in training. Samples with a predicted response greater than 0.5 were compared to samples with a predicted response less than 0.5 using a log-rank test.

MSI status. The MSI status was extracted from Bonneville et al. (23). Samples with a MANTIS score larger than 0.4 were considered MSI positive as described in the publication.