Limitation of movement during fetal development may lead to multiple joint contractures in the neonate, termed arthrogryposis multiplex congenita. Neuromuscular disorders are among the many different causes of reduced fetal movement. Many congenital myasthenic syndromes (CMSs) are due to mutations of the adult-specific ε subunit of the acetylcholine receptor (AChR), and, thus, functional deficits do not arise until late in gestation. However, an earlier effect on the fetus might be predicted with some defects of other AChR subunits. We studied a child who presented at birth with joint contractures and was subsequently found to have a CMS. Mutational screening revealed heteroallelic mutation within the AChR δ subunit gene, δ756ins2 and δE59K. Expression studies demonstrate that δ756ins2 is a null mutation. By contrast, both fetal and adult AChR containing δE59K have shorter than normal channel activations that predict fast decay of endplate currents. Thus, δE59K causes dysfunction of fetal as well as the adult AChR and would explain the presence of joint contractures on the basis of reduced fetal movement. This is the first report of the association of AChR gene mutations with arthrogryposis multiplex congenita. It is probable that mutations that severely disrupt function of fetal AChR will underlie additional cases. 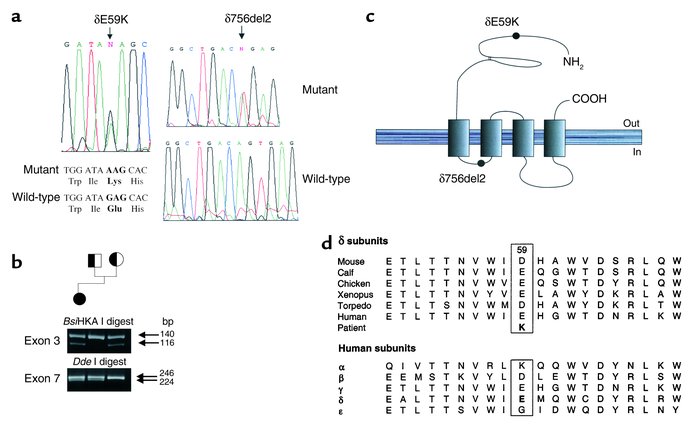 () DNA sequence analysis of PCR amplicons from patient and control DNA samples showing a G→A transition in exon 3 and an AG dinucleotide deletion in exon 7; both are heterozygous. () Restriction endonuclease digestion analysis of PCR amplicons from propositus and parents. Digests were subjected to electrophoresis on 2% agarose/TBE gels and visualized under ultraviolet light. A HKA I digest of the exon 3 amplicon shows δE59K is inherited from the mother, and a I digest of the exon 7 amplicon shows δ756del2 is inherited from the father. () Schematic representation of the position of the mutations within the δ subunit. () Multiple alignments of deduced amino acid sequences in the vicinity of the δE59K mutation in the N-terminal extracellular domain for the human AChR subunits and for δ subunits from six species.