NPHS2 was recently identified as a gene whose mutations cause autosomal recessive steroid-resistant nephrotic syndrome. Its product, podocin, is a new member of the stomatin family, which consists of hairpin-like integral membrane proteins with intracellular NH2- and COOH-termini. Podocin is expressed in glomerular podocytes, but its subcellular distribution and interaction with other proteins are unknown. Here we show, by immunoelectron microscopy, that podocin localizes to the podocyte foot process membrane, at the insertion site of the slit diaphragm. Podocin accumulates in an oligomeric form in lipid rafts of the slit diaphragm. Moreover, GST pull-down experiments reveal that podocin associates via its COOH-terminal domain with CD2AP, a cytoplasmic binding partner of nephrin, and with nephrin itself. That podocin interacts with CD2AP and nephrin in vivo is shown by coimmunoprecipitation of these proteins from glomerular extracts. Furthermore, in vitro studies reveal direct interaction of podocin and CD2AP. Hence, as with the erythrocyte lipid raft protein stomatin, podocin is present in high-order oligomers and may serve a scaffolding function. We postulate that podocin serves in the structural organization of the slit diaphragm and the regulation of its filtration function. 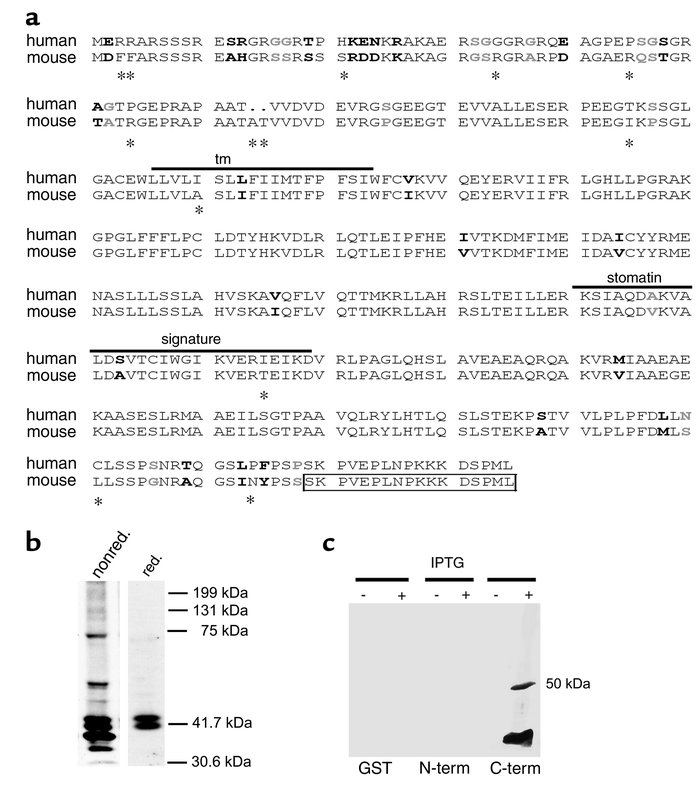 Molecular cloning and Western blot analysis of mouse podocin. () Amino acid sequence comparison of human and mouse podocin. Similar residues are shown in boldface, strong similarity in black, and weaker similarity in gray. Different amino acids are marked by asterisks. The transmembrane domain (tm) and the stomatin signature are overlined. The box indicates the peptide used for antibody generation. Most of the amino acid exchanges between human and mouse are restricted to the NH2-terminal part of the protein, whereas the tm domain, the stomatin signature, and the COOH-terminal part are almost identical. The sequence data of mouse podocin are available from GenBank/EMBL/DDBJ under accession no. AJ302048. () Western blot analysis of glomerular extracts revealed a 42-kDa band under reducing (red.) conditions (right lane). Under nonreducing (nonred.) conditions (left panel), additional higher molecular bands appeared, indicating podocin dimerization. () The specificity of the podocin antibody was confirmed by Western blot analysis of recombinant GST-podocin fragments and GST alone. Only the COOH-terminal fusion protein (C-term) was recognized by the antibody. N-term, NH2-terminal fusion protein.