Neuromuscular junctions are stable in patients with cancer cachexia

Neuromuscular junctions are stable in patients with cancer cachexia

Cancer cachexia is a major cause of patient morbidity and mortality, with no efficacious treatment or management strategy. Despite cachexia sharing pathophysiological features with a number of neuromuscular wasting conditions, including age-related sarcopenia, the mechanisms underlying cachexia remain poorly understood. Studies of related conditions suggest that pathological targeting of the neuromuscular junction (NMJ) may play a key role in cachexia, but this has yet to be investigated in human patients. Here, high-resolution morphological analyses were undertaken on NMJs of rectus abdominis obtained from patients undergoing upper GI cancer surgery compared with controls (N = 30; n = 1,165 NMJs). Cancer patients included those with cachexia and weight-stable disease. Despite the low skeletal muscle index and significant muscle fiber atrophy (P < 0.0001) in patients with cachexia, NMJ morphology was fully conserved. No significant differences were observed in any of the pre- and postsynaptic variables measured. We conclude that NMJs remain structurally intact in rectus abdominis in both cancer and cachexia, suggesting that denervation of skeletal muscle is not a major driver of pathogenesis. The absence of NMJ pathology is in stark contrast to what is found in related conditions, such as age-related sarcopenia, and supports the hypothesis that intrinsic changes within skeletal muscle, independent of any changes in motor neurons, represent the primary locus of neuromuscular pathology in cancer cachexia. 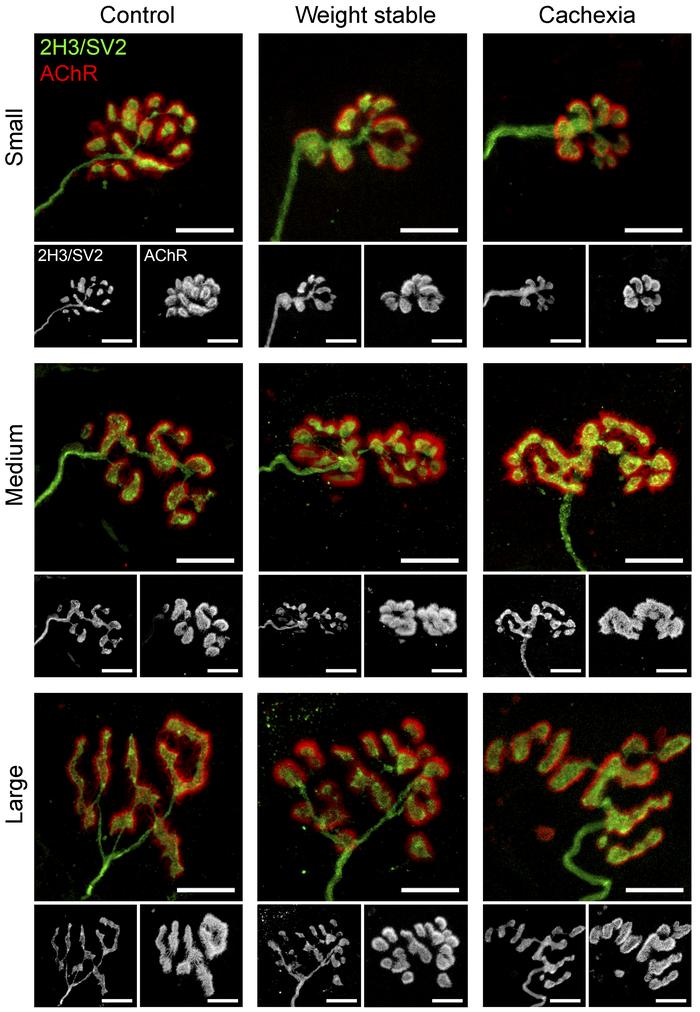 Confocal micrographs of representative small, medium, and large NMJs from RA in the 3 patient groups. Despite heterogeneity in size and shape of individual NMJs, overall morphology was conserved across all groups, with no evidence of NMJ pathology in either the cachexia or weight-stable groups. Axon and nerve terminals are shown in green (2H3/SV2) and AChRs of the motor endplate in red (α-BTX). Scale bars: 10 μm.