It has been postulated that TNF has a pivotal role in a cytokine cascade that results in joint inflammation and destruction in rheumatoid arthritis (RA). To evaluate this, we examined the response of TNF-deficient (Tnf–/–) mice in two models of RA. Collagen-induced arthritis (CIA) was induced by injection of chick type II collagen (CII) in CFA. Tnf–/– mice had some reduction in the clinical parameters of CIA and, on histology, significantly more normal joints. However, severe disease was evident in 54% of arthritic Tnf–/– joints. Tnf–/– mice had impaired Ig class switching, but preserved T cell proliferative responses to CII and enhanced IFN-γ production. Interestingly, CII-immunized Tnf–/– mice developed lymphadenopathy and splenomegaly associated with increased memory CD4+ T cells and activated lymph node B cells. Acute inflammatory arthritis was also reduced in Tnf–/– mice, although again some mice exhibited severe disease. We conclude that TNF is important but not essential for inflammatory arthritis; in each model, severe arthritis could proceed even in the complete absence of TNF. These results call into doubt the concept that TNF is obligatory for chronic autoimmune and acute inflammatory arthritis and provide a rationale for further studies into TNF-independent cytokine pathways in arthritis. 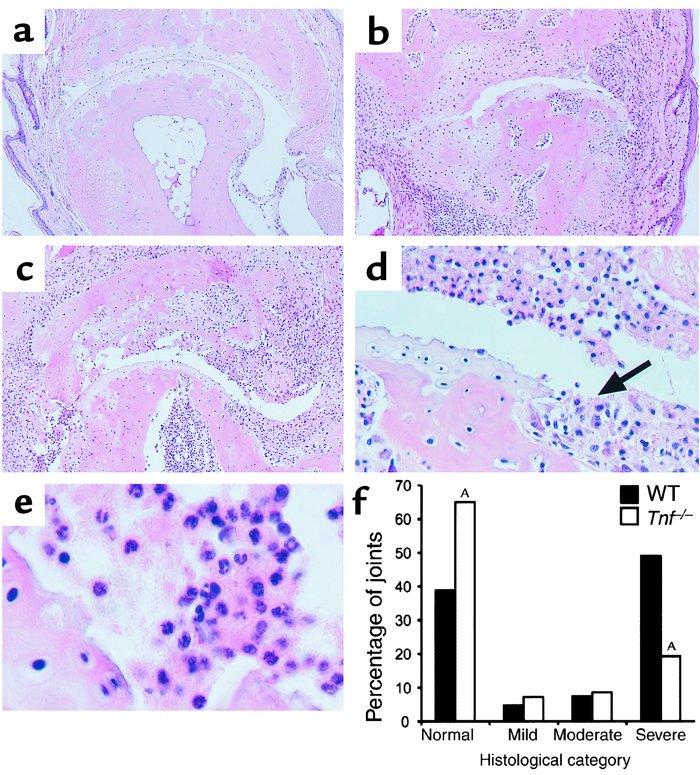 Histopathological assessment of joints from CII-immunized and WT mice. At 60 days after primary immunization with CII, mice were sacrificed, their limbs removed, and the paws processed for histological assessment as described in Methods. Frontal sections of normal () and severely arthritic interphalangeal joints of WT () and () mice are shown. (, ) Higher magnification views of some of the histopathological features of . Hematoxylin and eosin stained sections, original magnification: (–) ×100, () ×400, and () ×1,000. Arrow indicates invasive synovial pannus. () Sections were blindly graded as either normal, mild, moderate, or severe. Results show the percentage of joints from ( = 140 joints) and WT ( = 147 joints) mice in each group. A < 0.001, compared with the same histological grade in WT mice.