The Epstein-Barr virus (EBV) is one of the predominant tumor viruses in humans, but so far no therapeutic or prophylactic vaccination against this transforming pathogen is available. We demonstrated that heterologous prime-boost vaccination with the nuclear antigen 1 of EBV (EBNA1), either targeted to the DEC205 receptor on DCs or expressed from a recombinant modified vaccinia virus Ankara (MVA) vector, improved priming of antigen-specific CD4+ T cell help. This help supported the expansion and maintenance of EBNA1-specific CD8+ T cells that are most efficiently primed by recombinant adenoviruses that encode EBNA1. These combined CD4+ and CD8+ T cell responses protected against EBNA1-expressing T and B cell lymphomas, including lymphoproliferations that emerged spontaneously after EBNA1 expression. In particular, the heterologous EBNA1-expressing adenovirus, boosted by EBNA1-encoding MVA vaccination, demonstrated protection as a prophylactic and therapeutic treatment for the respective lymphoma challenges. Our study shows that such heterologous prime-boost vaccinations against EBV-associated malignancies as well as symptomatic primary EBV infection should be further explored for clinical development. 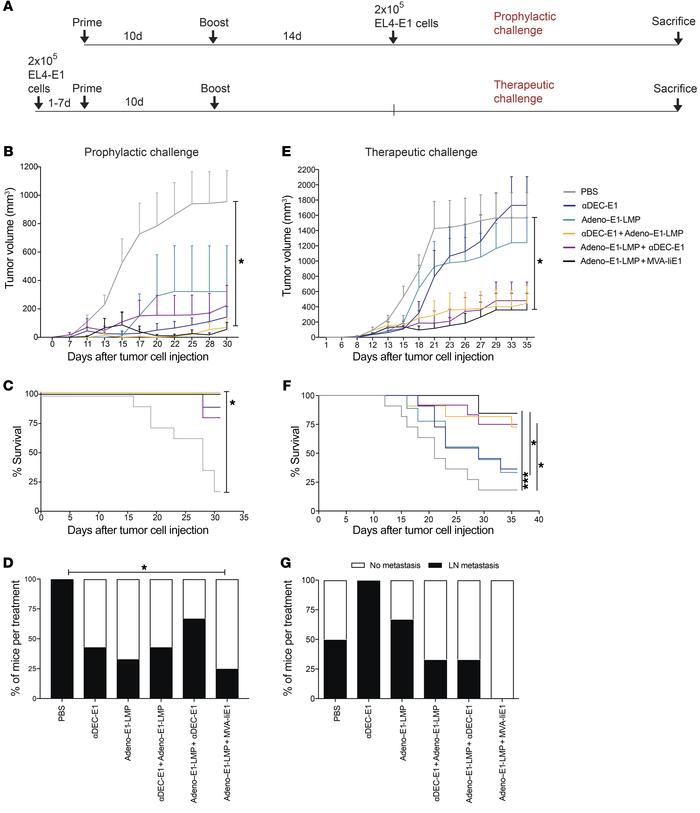 () hHuDEC205-Tg mice were immunized with different combinations of vaccines for the prime and the boost, which were scheduled 10 days apart. Mice were s.c. challenged with 2 × 105 EBNA1-expressing EL4 cells (EL4-E1) either 14 days after the boost in a prophylactic setting (, , and ) or 1 to 7 days before the prime vaccination in a therapeutic setting (, , and ). Mice were monitored every second day, weight was measured, and tumor size was analyzed by caliper. Mice were sacrificed when the tumor reached 15 mm or more in diameter. ( and ) The tumor volume was calculated using the formula A2 × B × 0.52, where A is the shortest diameter perpendicular to the longest diameter, and B is the longest diameter. The mean tumor volume plus the SD of 3 independent experiments with at least 3 mice per group is shown. * < 0.05 versus PBS-treated mice; 2-way ANOVA with Tukey’s multiple comparisons test. ( and ) The percentage survival from 3 independent experiments with at least 3 mice per group is shown. * < 0.05 and *** < 0.001; Mantel-Cox test. ( and ) At sacrifice, bulk single-cell suspensions of LN cells were harvested and analyzed by EBNA1 qPCR from representative prophylactic () and therapeutic () EL4-E1 tumor challenges. Abundance of the gene was normalized to the gene as the tumor load. A tumor-load cutoff of 0.005 or greater was set. The percentage of mice per condition with and without tumor burden in the LNs is depicted. Statistical analysis was done by 2-way ANOVA with Tukey’s multiple comparisons test using the quantitation cycle (cq) value of the qPCR.