Carrying the ε4 allele of the APOE gene encoding apolipoprotein E (APOE4) markedly increases the risk for late-onset Alzheimer’s disease (AD), in which APOE4 exacerbates the brain accumulation and subsequent deposition of amyloid-β (Aβ) peptides. While the LDL receptor–related protein 1 (LRP1) is a major apoE receptor in the brain, we found that its levels are associated with those of insoluble Aβ depending on APOE genotype status in postmortem AD brains. Thus, to determine the functional interaction of apoE4 and LRP1 in brain Aβ metabolism, we crossed neuronal LRP1-knockout mice with amyloid model APP/PS1 mice and APOE3–targeted replacement (APO3-TR) or APOE4-TR mice. Consistent with previous findings, mice expressing apoE4 had increased Aβ deposition and insoluble amounts of Aβ40 and Aβ42 in the hippocampus of APP/PS1 mice compared with those expressing apoE3. Intriguingly, such effects were reversed in the absence of neuronal LRP1. Neuronal LRP1 deficiency also increased detergent-soluble apoE4 levels, which may contribute to the inhibition of Aβ deposition. Together, our results suggest that apoE4 exacerbates Aβ pathology through a mechanism that depends on neuronal LRP1. A better understanding of apoE isoform–specific interaction with their metabolic receptor LRP1 on Aβ metabolism is crucial for defining APOE4-related risk for AD.

Impact of on the association between levels of LRP1 and insoluble Aβ in AD brains. 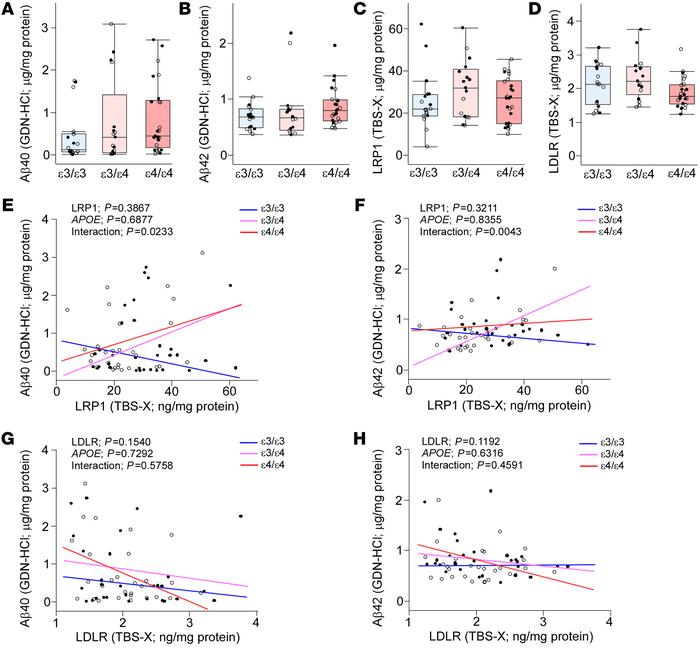