The ABC transporter ABCA1 regulates HDL levels and is considered to control the first step of reverse cholesterol transport from the periphery to the liver. To test this concept, we studied the effect of ABCA1 deficiency on hepatic metabolism and hepatobiliary flux of cholesterol in mice. Hepatic lipid contents and biliary secretion rates were determined in Abca1–/–, Abca1+/–, and Abca1+/+ mice with a DBA background that were fed either standard chow or a high-fat, high-cholesterol diet. Hepatic cholesterol and phospholipid contents in Abca1–/– mice were indistinguishable from those in Abca1+/– and Abca1+/+ mice on both diets. In spite of the absence of HDL, biliary secretion rates of cholesterol, bile salts, and phospholipid were unimpaired in Abca1–/– mice. Neither the hepatic expression levels of genes controlling key steps in cholesterol metabolism nor the contribution of de novo synthesis to biliary cholesterol and bile salts were affected by Abca genotype. Finally, fecal excretion of neutral and acidic sterols was similar in all groups. We conclude that plasma HDL levels and ABCA1 activity do not control net cholesterol transport from the periphery via the liver into the bile, indicating that the importance of HDL in reverse cholesterol transport requires re-evaluation. 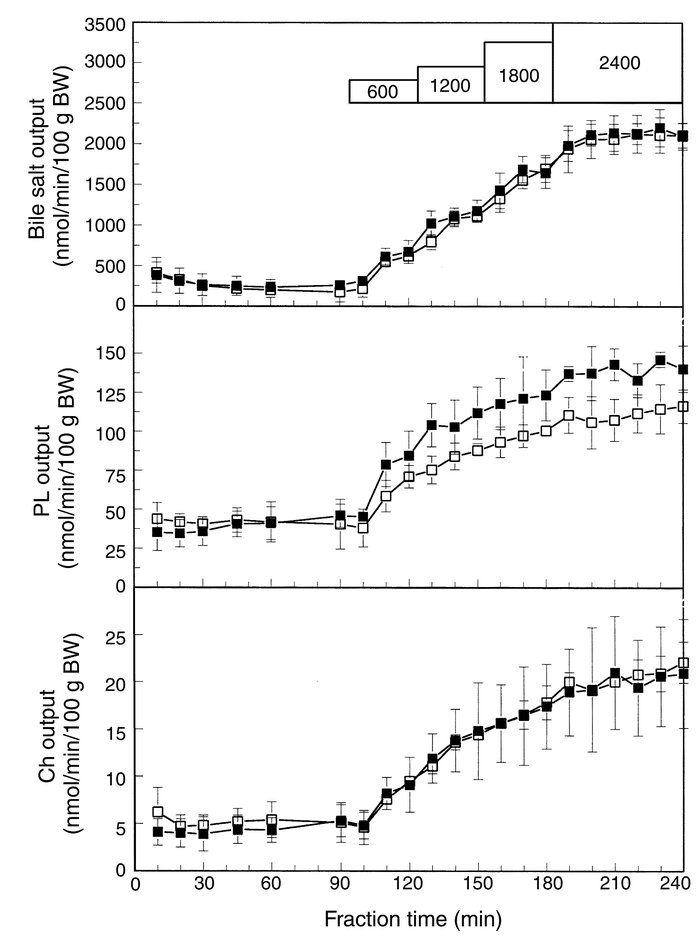 Biliary bile salt and lipid secretion in and mice during infusion of TUDC. The gallbladders of mice were cannulated and bile was collected for 90 minutes in order to deplete the endogenous bile salt pool. Subsequently, TUDC was infused via the tail vein in a stepwise-increasing fashion, as indicated by the numbers (nmol/min/100 g BW) in the figure. Data represent mean ± SD for four female mice in each group; during the infusion phase there was a significant difference in phospholipid secretion between wild-type (filled boxes) and knockout (open boxes) mice. < 0.05 (ANOVA). Ch, cholesterol. PL, phospholipid.