More friend than foe: the emerging role of neutrophils in tissue repair

More friend than foe: the emerging role of neutrophils in tissue repair

Neutrophils are the most abundant immune cells in humans and serve as first responders to a myriad of host perturbations. Equipped with a plethora of antimicrobial molecules, neutrophils invade sites of inflammation to eradicate pathogens and clear debris. Traditionally, neutrophils were thought to cause collateral tissue damage before dying at the site. However, the presence of neutrophil infiltration into sterile injuries (in the absence of infections) suggests additional roles for these cells. Now, the view of neutrophils as indiscriminate killers seems to be changing as evolving evidence suggests that neutrophils actively orchestrate resolution of inflammation and contribute to tissue repair. Novel concepts include the idea that neutrophils are key to revascularization and subsequently reverse-transmigrate back to the vasculature, actively leaving sites of tissue damage to re-home to functional niches in the lung and bone marrow. This Review scrutinizes the role of neutrophils in tissue damage and repair, discussing recent findings and raising unresolved questions around this intriguing immune cell. 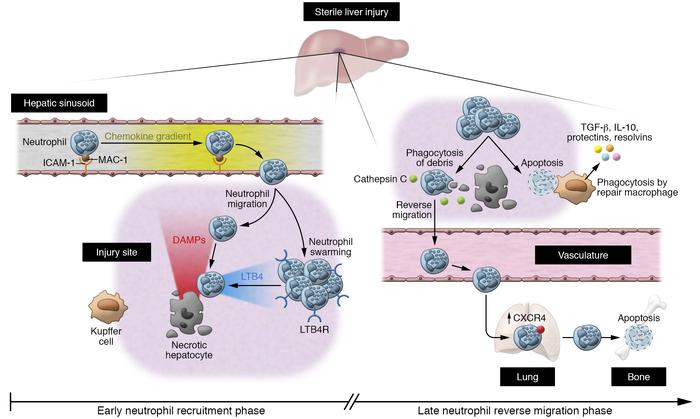 Left: Early neutrophil recruitment phase. Neutrophils are recruited as early as 15 to 30 minutes to the site of injury and fully cover the necrotic area within 4 hours. Their adhesion to hepatic sinusoids is achieved by binding of MAC-1 to endothelial ICAM-1. Recruitment occurs via CXC chemokine gradients along the endothelium, and closer to the focal necrosis, chemotaxis is guided by danger signals such as the -formyl peptides, ATP and HMGB1. In a second phase known as neutrophil swarming, additional neutrophils are recruited and leukotriene B4 (LTB4) provides signal amplification. Tissue-resident macrophages called Kupffer cells serve as sentinels, detecting DAMPs and mediating recruitment of neutrophils. Right: Late neutrophil reverse migration phase. Over the next few hours, neutrophils phagocytose debris, dismantle vessels, and show a random back-and-forth movement. At the injury border, neutrophils show a directed movement away from the injury toward vessels, eventually clearing the injury site via the vasculature. CTSC is required for reverse migration by activating neutrophil serine proteases. Neutrophils migrate toward the lung vasculature, upregulating CXCR4 and eventually traveling to bone marrow, where they die by apoptosis. Some neutrophils die on site and are phagocytosed by resident or infiltrating macrophages, leading to macrophage phenotype switching and release of pro-resolving mediators. LTB4R, leukotriene B4 receptor.