Septic patients frequently develop cognitive impairment that persists beyond hospital discharge. The impact of sepsis on electrophysiological and molecular determinants of learning is underexplored. We observed that mice that survived sepsis or endotoxemia experienced loss of hippocampal long-term potentiation (LTP), a brain-derived neurotrophic factor–mediated (BDNF-mediated) process responsible for spatial memory formation. Memory impairment occurred despite preserved hippocampal BDNF content and could be reversed by stimulation of BDNF signaling, suggesting the presence of a local BDNF inhibitor. Sepsis is associated with degradation of the endothelial glycocalyx, releasing heparan sulfate fragments (of sufficient size and sulfation to bind BDNF) into the circulation. Heparan sulfate fragments penetrated the hippocampal blood-brain barrier during sepsis and inhibited BDNF-mediated LTP. Glycoarray approaches demonstrated that the avidity of heparan sulfate for BDNF increased with sulfation at the 2-O position of iduronic acid and the N position of glucosamine. Circulating heparan sulfate in endotoxemic mice and septic humans was enriched in 2-O– and N-sulfated disaccharides; furthermore, the presence of these sulfation patterns in the plasma of septic patients at intensive care unit (ICU) admission predicted persistent cognitive impairment 14 days after ICU discharge or at hospital discharge. Our findings indicate that circulating 2-O– and N-sulfated heparan sulfate fragments contribute to septic cognitive impairment. 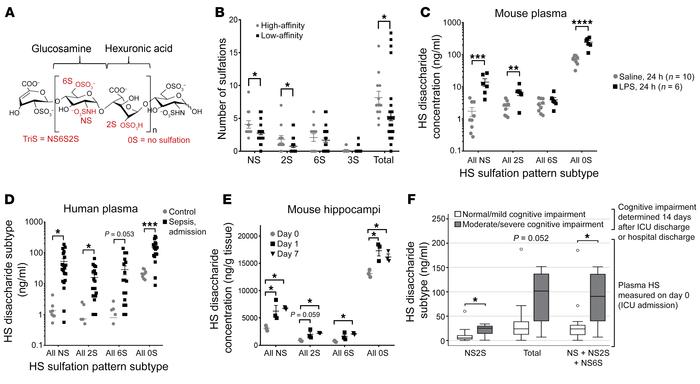 () Heparan sulfate disaccharides may be sulfated at the (NS) and 6- (6S) positions of glucosamine and the 2- (2S) position of iduronic acid. () Glycoarray analyses showed that heparan sulfate oligosaccharides, which bind to BDNF ( = 12), were enriched in NS and 2S compared with low-affinity ( = 40) oligosaccharides. 3S sulfation (found only in heparin) was not associated with binding. ( and ) Circulating heparan sulfate fragments detected by mass spectrometry in plasma collected () 24 hours after i.p. LPS administration (10 μg/g BW) in mice or () at the time of ICU admission in patients ( = 20) with sepsis were enriched in sulfation (including NS, NS2S, NS6S, and TriS disaccharides) and 2- sulfation (NS2S, 2S, 2S6S, and TriS). Control patients were normal blood donors ( = 9). () Mouse hippocampi after sepsis were enriched in - and 2- sulfation on day 7 ( = 3 for all time points and groups). () Patients who showed moderate to severe cognitive impairment (MoCA score <21 or cognitive inability to perform the test, = 6) at the time of hospital discharge (or on day 14 after ICU discharge) were those who previously had (at the time of ICU admission, day = 0) circulating heparan sulfate enriched in NS2S disaccharides or a combination of NS, NS2S, and NS6S disaccharides. = 14 patients with normal to mild impairment. Horizontal lines in the boxes represent the median, borders represent the 25th and 75th percentiles, and whiskers represent the upper and lower adjacent values (1.5 × interquartile range, Tukey’s method). Outside values were included in the analyses. * < 0.05, ** < 0.01, *** < 0.001, and **** < 0.0001, by test for single comparisons (–), ANOVA with Tukey’s correction for multiple comparisons (), or Wilcoxon rank-sum test ().