In response to viral pathogens, the host upregulates antiviral genes that suppress translation of viral mRNAs. However, induction of such antiviral responses may not be exclusive to viruses, as the pathways lie at the intersection of broad inflammatory networks that can also be induced by bacterial pathogens. Using a model of Gram-negative sepsis, we show that propagation of kidney damage initiated by a bacterial origin ultimately involves antiviral responses that result in host translation shutdown. We determined that activation of the eukaryotic translation initiation factor 2-α kinase 2/eukaryotic translation initiation factor 2α (Eif2ak2/Eif2α) axis is the key mediator of translation initiation block in late-phase sepsis. Reversal of this axis mitigated kidney injury. Furthermore, temporal profiling of the kidney translatome revealed that multiple genes involved in formation of the initiation complex were translationally altered during bacterial sepsis. Collectively, our findings imply that translation shutdown is indifferent to the specific initiating pathogen and is an important determinant of tissue injury in sepsis. 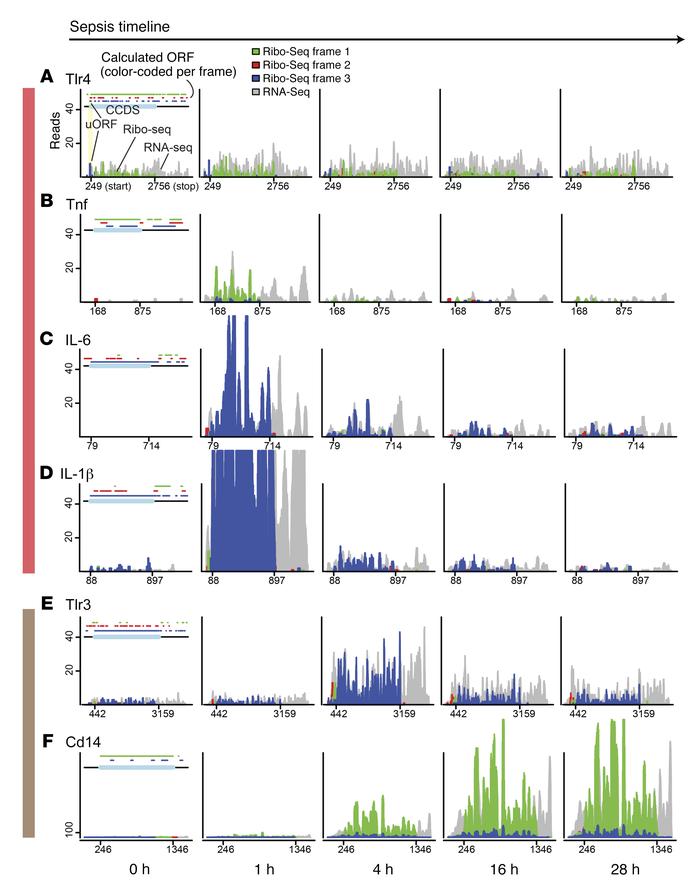 (–) Ribo-Seq analysis of select genes under indicated conditions. Details for data visualization strategy are described in . RNA-Seq reads (gray) and Ribo-Seq reads (red, blue, green) were mapped to the mouse transcriptome. The axes denote mRNA positions (position 1 is the start of 5′ UTR and x-max position is the end of 3′ UTR). The axes denote read coverage. Green, red, and blue colors in the histogram correspond to ribosome frames 1, 2, and 3, respectively. On the top of each control figure (0 hour), calculated ORF positions (defined by ATG start codon, TAG/TAA/TGA stop codons) and their associated frame colors as determined by modulo operation are shown. Annotated CCDS is highlighted in light blue on the top, and its start and stop positions are shown on the axis. When multiple isoforms are present, a protein coding transcript with best curated isoform is shown (e.g., gold transcript in Ensembl). All read lengths are displayed (median, 29 nt). The color-coded vertical bars (red, brown) correspond to pathways highlighted in .