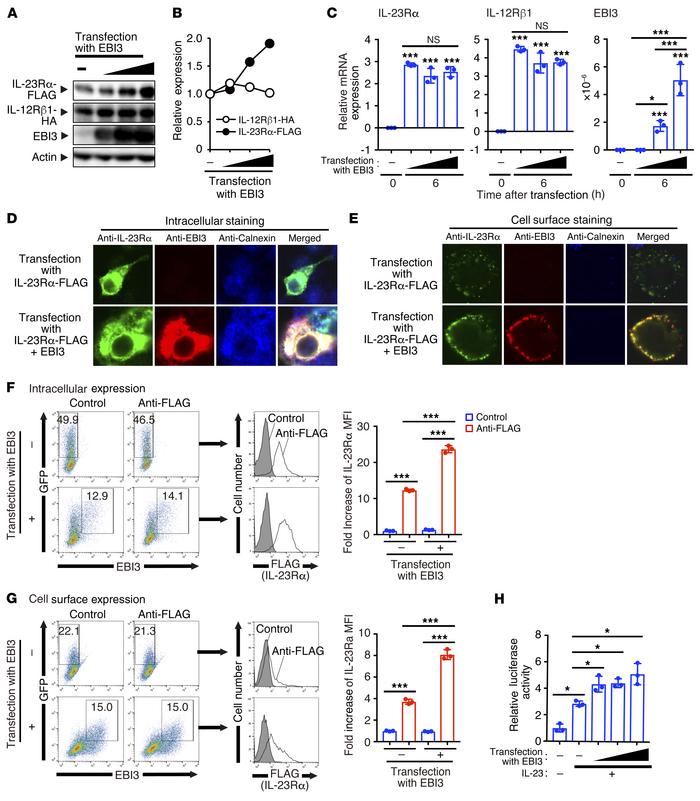 (–) HEK293T cells were transfected with expression vectors of IL-23Rα-FLAG, IL-12Rβ1-HA, and EBI3, and 72 hours later total cell lysates were prepared, followed by Western blotting (). Intensity of each band was quantified, and the expression of IL-23Rα and IL-12Rβ1 was normalized to actin and is shown as the relative expression to respective untransfection (). RNA was also prepared 6 hours after the stimulation and subjected to quantitative RT-PCR (). was used as a housekeeping gene to normalize each mRNA expression. ( and ) The transfected HEK293T cells were also intracellularly fixed and stained for IL-23Rα, EBI3, and calnexin (). For cell-surface staining, the fixation procedure was omitted (). Representative photographs are shown. Original magnification, ×600. ( and ) AD293 cells were transfected with expression vectors of FLAG–IL-23Rα-IRES-GFP and EBI3, and 72 hours later cells were fixed and intracellularly stained for FLAG–IL-23Rα and EBI3 (). Cells were also stained for cell-surface expression of FLAG–IL-23Rα followed by intracellular staining for EBI3 (). Representative dot plots of GFP and EBI3, and histograms of FLAG–IL-23Rα in GFP+EBI3− and GFP+EBI3+ cells are shown, and the fold increase of MFI of FLAG–IL-23Rα expression was calculated. () HEK293T cells were transfected with expression vectors of IL-23Rα-FLAG, IL-12Rβ1-HA, EBI3, 3xGAS-Luc, and RL-TK, and 48 hours later, these cells were stimulated with IL-23 for more 6 hours. Total cell lysates were then prepared, and luciferase activity was measured and is shown as relative activity. Data are shown as mean ± SD ( = 3, and –) and are representative of 3 independent experiments. values were determined using 1-way ANOVA ( and –). * < 0.05; *** < 0.001.