The potential of the paired Ig-like receptors of activating (PIR-A) and inhibitory (PIR-B) types for modifying an IgE antibody–mediated allergic response was evaluated in mouse bone marrow–derived mast cells. Although mast cells produced both PIR-A and PIR-B, PIR-B was found to be preferentially expressed on the cell surface, where it was constitutively tyrosine phosphorylated and associated with intracellular SHP-1 protein tyrosine phosphatase. PIR-B coligation with the IgE receptor (FcεRI) inhibited IgE-mediated mast cell activation and release of serotonin. Surprisingly, the inhibitory activity of PIR-B was unimpaired in SHP-1–deficient mast cells. A third functional tyrosine-based inhibitory motif, one that fails to bind the SHP-1, SHP-2, and SHIP phosphatases, was identified in parallel studies of FcεRI-bearing rat basophilic leukemia (RBL) cells transfected with constructs having mutations in the PIR-B cytoplasmic region. These results define the preferential expression of the PIR-B molecules on mast cells and an inhibitory potential that can be mediated via a SHP-1–independent pathway. 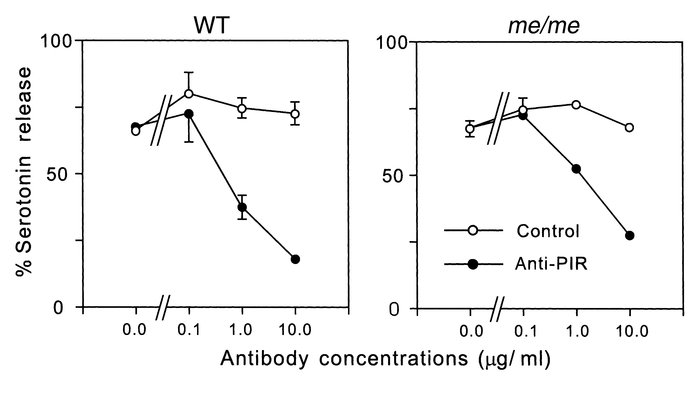 PIR-B inhibitory activity in FcεRI-induced serotonin release. 3H-Serotonin preloaded mast cells from wild-type neonatal spleen (left) and motheaten mutant neonatal spleen (right) were incubated with rat IgE anti-DNP mAb plus various concentrations of F(ab′)2 fragments of rat mAb specific for PIR (filled circles) or unknown cell surface antigen (open circles). Antibody-primed cells were then triggered with F(ab′)2 fragments of rabbit anti-rat Ig antibody as a cross-linker, and the 3H-serotonin release was measured as described in Methods. The standard deviation from the mean (circle) is indicated by bars only for the points at which this value (1 SD) is greater than the circle radius.