We sought to determine whether mice deficient in the proinflammatory caspase-1, which cleaves precursors of IL-1β and IL-18, were protected against ischemic acute renal failure (ARF). Caspase-1–/– mice developed less ischemic ARF as judged by renal function and renal histology. These animals had significantly reduced blood urea nitrogen and serum creatinine levels and a lower morphological tubular necrosis score than did wild-type mice with ischemic ARF. Since caspase-1 activates IL-18, lack of mature IL-18 might protect these caspase-1–/– mice from ARF. In wild-type animals, we found that ARF causes kidney IL-18 levels to more than double and induces the conversion of the IL-18 precursor to the mature form. This conversion is not observed in caspase-1–/– ARF mice or sham-operated controls. We then injected wild-type mice with IL-18–neutralizing antiserum before the ischemic insult and found a similar degree of protection from ARF as seen in caspase-1–/– mice. In addition, we observed a fivefold increase in myeloperoxidase activity in control mice with ARF, but no such increase in caspase-1–/– or IL-18 antiserum–treated mice. Finally, we confirmed histologically that caspase-1–/– mice show decreased neutrophil infiltration, indicating that the deleterious role of IL-18 in ischemic ARF may be due to increased neutrophil infiltration. 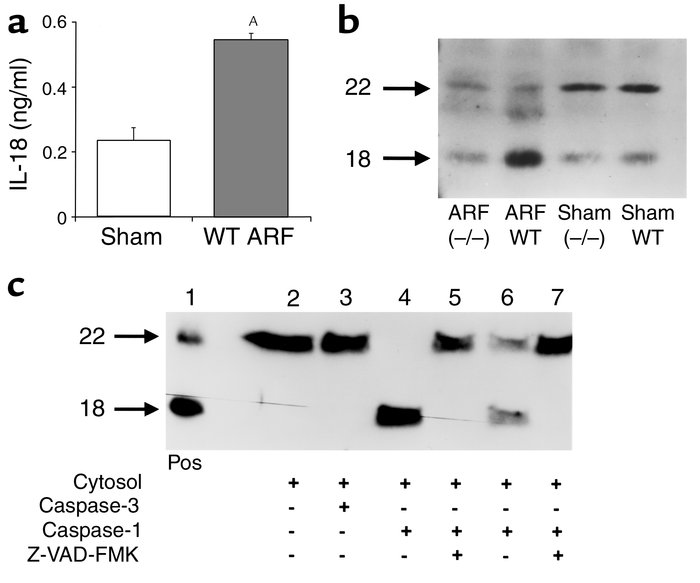 IL-18 in ischemic ARF. () IL-18 protein, measured by the ECL assay, was increased in ischemic ARF in wild-type (WT) mice compared with sham-operated controls (sham). A < 0.01 vs. sham, = 6. () In sham-operated wild-type (WT) and mice, IL-18 was predominantly in the pro–IL-18 form (22 kDa). In wild-type mice with ischemic ARF (ARF WT), there was a conversion of the pro–IL-18 form (22 kDa) to the active form (18 kDa). This conversion of the pro–IL-18 to active IL-18 form was attenuated in mice with ischemic ARF (ARF–/–). The immunoblot shown is representative of three separate experiments. () In an in vitro experiment, cytosolic extracts from normal wild-type WT mouse kidney were incubated with purified caspases. Recombinant murine pro–IL-18 (22 kDa) and active IL-18 (18 kDa) were used as a positive control (Pos) (lane 1). In the cytosolic extract with no additions, IL-18 was present only in the precursor form (lane 2) and addition of purified caspase-3 (10 ng) had no effect (lane 3). Addition of purified caspase-1 (10 ng) completely cleaved IL-18 from the precursor to active form (lane 4) and caspase-1 (1 ng) partially cleaved IL-18 (lane 6). Prior incubation with the caspase inhibitor, Z-VAD-FMK, prevents the cleavage of pro–IL-18 to active IL-18 (lanes 5 and 7). These data demonstrate that caspase-1, but not caspase-3, cleaves IL-18 in the mouse kidney.