The distribution of telomere length in humans is broad, but it has finite upper and lower boundaries. Growing evidence shows that there are disease processes that are caused by both short and long telomere length extremes. The genetic basis of these short and long telomere syndromes may be linked to mutations in the same genes, such as the telomerase reverse transcriptase (TERT), but through differential effects on telomere length. Short telomere syndromes have a predominant degenerative phenotype marked by organ failure that most commonly manifests as pulmonary fibrosis and are associated with a relatively low cancer incidence. In contrast, insights from studies of cancer-prone families as well as genome-wide association studies (GWAS) have identified both rare and common variants that lengthen telomeres as being strongly associated with cancer risk. We have hypothesized that these cancers represent a long telomere syndrome that is associated with a high penetrance of cutaneous melanoma and chronic lymphocytic leukemia. In this Review, we will synthesize the clinical and human genetic observations with data from mouse models to define the role of telomeres in cancer etiology and biology.

Schematic of mutant telomerase and telomere genes in Mendelian short and long telomere syndromes and model for allele–specific effects on telomere length. 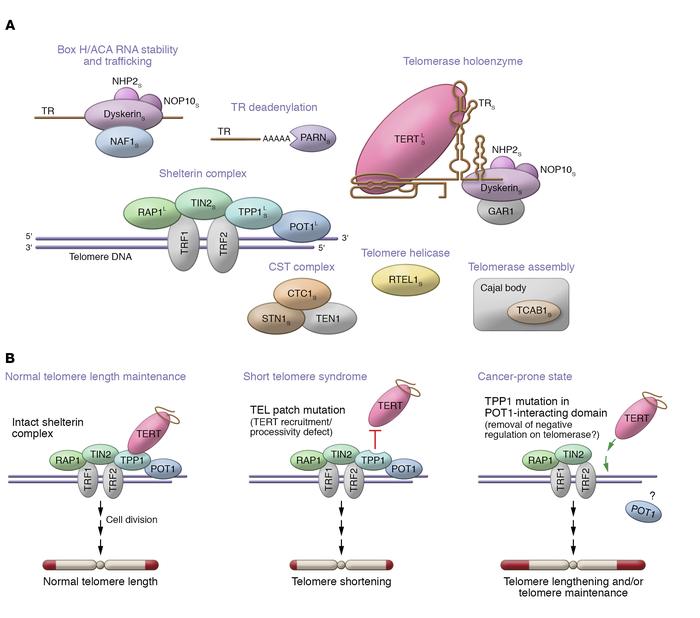 () Components with known mutations are shown in color, and their telomere function is indicated above each group. Thirteen genes have been identified, with the short telomere syndrome associations marked by a subscript S. Four genes are associated with long telomere syndrome phenotypes and are marked by a superscript L. Adapted with permission from (). () The left panel shows the state of telomere length maintenance normally. The middle panel shows how in-frame deletions in the TEL patch interfere with TERT recruitment and processivity, provoking telomere shortening. The right panel shows a model for how cancer-associated mutations may promote telomere maintenance in cancer-prone families. deletions or missense mutations in the POT1-interating domain are predicted to affect POT1’s telomere-binding capacity, allowing TERT to elongate more efficiently. The latter is hypothesized to have a net effect of telomere lengthening and/or telomere maintenance.