Opening windows for bone remodeling through a SLIT

Opening windows for bone remodeling through a SLIT

Bone formation and resorption are tightly coupled, and dysfunction of either process leads to bone diseases, such as osteoporosis. Bone-forming agents have been explored clinically to increase bone density; however, long-term efficacy of these strategies is limited due to the accompanying increase in resorption in response to increased bone formation. Axonal guidance molecules have recently been shown to regulate formation-resorption coupling and thus have the potential for osteoporosis therapy. In this issue of the JCI, Kim et al. demonstrate that osteoclast-secreted SLIT3 influences bone formation and resorption by promoting osteoblast migration and suppressing osteoclast differentiation. Activation of SLIT3/ROBO signaling in ovariectomized mice increased bone mass, suggesting that SLIT3 should be further explored as a therapeutic target. 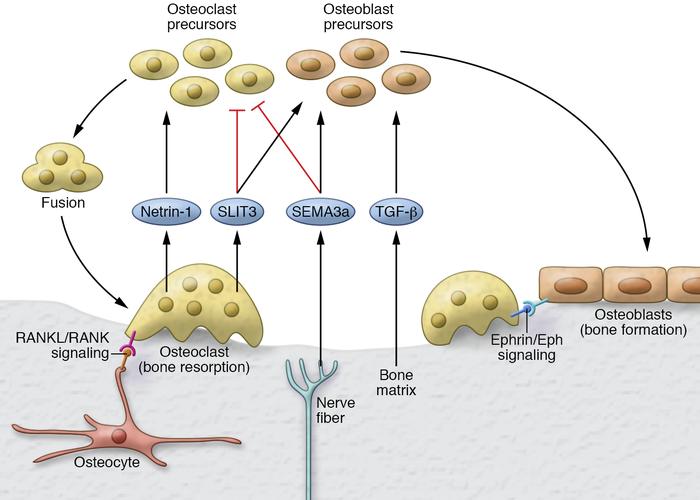 Bone formation and resorption coupling is a process wherein osteoclastic bone resorption is followed by osteoblastic bone formation. For resorption, two classes of axon guidance molecules, SLITs (SLIT3) and semaphorins (SEMA3a), act together to fine-tune repulsive signals for osteoclast migration, while inhibiting differentiation and cell fusion. SLIT3 is produced by mature osteoclasts, whereas the critical bone actions of SEMA3a originate from nerves. These repulsive and inhibitory effects of SEMA3a and SLIT3 on osteoclasts are countered by netrin-1, another molecule originally identified for its role in axon guidance. Netrin-1 attracts osteoclasts and promotes their fusion. Additional molecular pathways controlling osteoclasts include ephrin/ephrin receptor tyrosine kinase (ephrin/EPH) signaling via cell contact between osteoblasts and osteoclasts, and the RANKL/RANK pathway for osteoclastogenesis. For bone formation, signals released from mineralized matrix, such as TGF-β and IGF-1, in combination with signals secreted by osteoclasts, such as SLIT3, and those released by nerves, namely SEMA3a, serve in concert to recruit osteoblasts and promote their differentiation.