Pulsatile growth hormone (GH) secretion differs between males and females and regulates the sex-specific expression of cytochrome P450s in liver. Sex steroids influence the secretory dynamics of GH, but the neuroendocrine mechanisms have not been conclusively established. Because periventricular hypothalamic somatostatin (SST) expression is greater in males than in females, we generated knockout (Smst–/–) mice to investigate whether SST peptides are necessary for sexually differentiated GH secretion and action. Despite marked increases in nadir and median plasma GH levels in both sexes of Smst–/– compared with Smst+/+ mice, the mutant mice had growth curves identical to their sibling controls and retained a normal sexual dimorphism in weight and length. In contrast, the liver of male Smst–/– mice was feminized, resulting in an identical profile of GH-regulated hepatic mRNAs between male and female mutants. Male Smst-/- mice show higher expression of two SST receptors in the hypothalamus and pituitary than do females. These data indicate that SST is required to masculinize the ultradian GH rhythm by suppressing interpulse GH levels. In the absence of SST, male and female mice exhibit similarly altered plasma GH profiles that eliminate sexually dimorphic liver function but do not affect dimorphic growth. 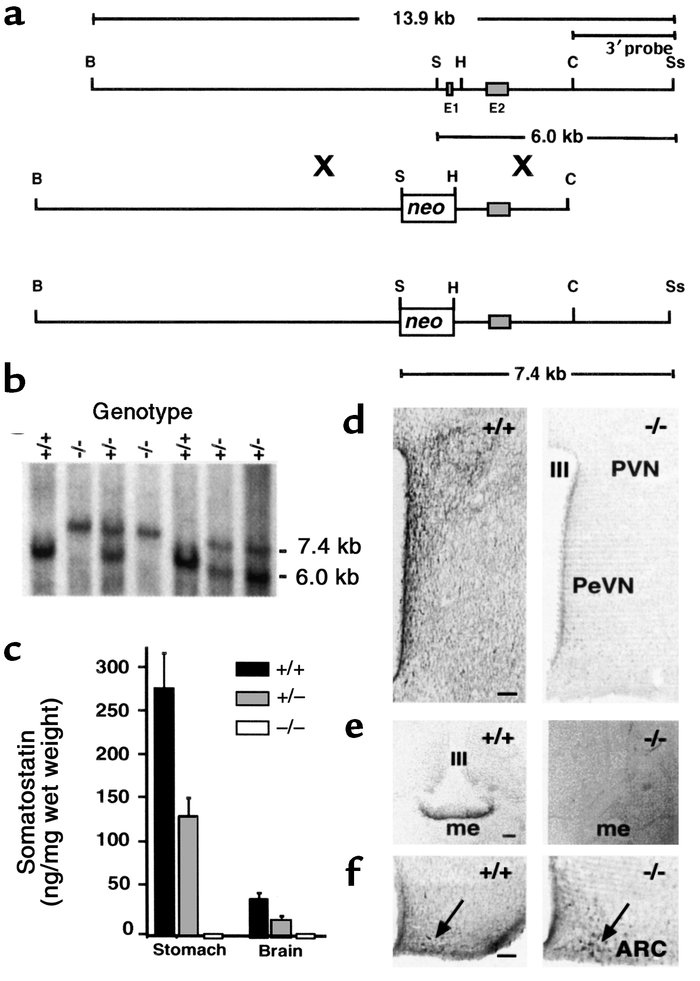 Generation of SST-deficient mice by homologous recombination. () Restriction maps of the mouse gene locus (top), targeting vector (middle), and predicted null allele after homologous recombination (bottom) indicate the replacement of exon 1 (E1) and the promoter by a PGK-neomycin selection cassette (. B, I; S, I; H, III; C, I; Ss, I. () A Southern blot of genomic DNA digested with I and I was hybridized with the 3′ probe indicated in . The 6.0-kb band represents the wild-type allele and the 7.4-kb band represents the null allele in the offspring of an mating pair. () RIA of SST in extracts of stomach and total brain ( = 3) demonstrates a 50% reduction in mice and levels below the assay sensitivity in mice. () Hemicoronal hypothalamic sections at the level of the periventricular nucleus (PeVN) and anterior paraventricular nucleus (PVN) of an and an male mouse were immunostained for SST. There is a dense network of immunopositive perikarya and fibers adjacent to the third ventricle (III) only in the mouse. These signals were also absent after preadsorption of the antiserum with synthetic SST (data not shown). Bars = 100 μm. () The median eminence (me) of an and an mouse were immunostained for SST prohormone. There is no detectable immunoreactivity in the external zone of the me in the mouse. () The arcuate nucleus (Arc) of an and an male mouse immunostained for GHRH. Immunoreactive neuronal perikarya are indicated by the arrows. No difference is apparent between genotypes.