The effect of arginine vasopressin (AVP) on NaCl transport was investigated in the isolated microperfused hamster ascending thin limb of Henle's loop by measuring transepithelial voltage (Vt) and transmural 22Na+ and 36Cl- fluxes. In the presence of a transmural NaCl concentration gradient (100 mM higher in the lumen), Vt was 8.4 +/- 0.4 mV. Addition of 1 nM AVP to the basolateral solution increased Vt to 9.6 +/- 0.4 mV, which corresponds to an increase in the Cl- to Na+ permselectivity ratio (PCl/PNa) from 2.8 +/- 0.2 to 3.4 +/- 0.2. AVP at physiological concentrations increased Vt in a dose-dependent manner with an ED50 of 5 pM. AVP increased the Cl- efflux coefficient from 99.6 +/- 6.3 to 131.4 +/- 10.6 x 10(-7) cm2/s without affecting the Na+ efflux coefficient. 5-Nitro-2-(3-phenyl-propylamino)-benzoate (0.2 mM), a Cl- channel inhibitor, in the perfusate decreased the basal Cl- efflux coefficient and inhibited the AVP-induced increase in this parameter. The AVP-induced increase in Vt was not affected by [d(CH2)5(1),O-Me-Tyr2,Arg8] vasopressin, a V1 receptor antagonist, but was abolished by [d(CH2)5,D-Ile2,Ile4,Arg8] vasopressin, a V2 receptor antagonist. The selective V2 agonist dDAVP in 1 nM also increased Vt from 8.6 +/- 0.7 to 9.5 +/- 0.6 mV. Dibutyryl cAMP and forskolin both increased Vt, whereas H89, an inhibitor of cAMP-dependent protein kinase, abolished the AVP-induced increase in Vt. These results demonstrate that AVP stimulates Cl- transport in the ascending thin limb of Henle's loop by activating Cl- channels via a signal transduction cascade comprising V2 receptors, adenylate cyclase, and cAMP-dependent protein kinase. The ascending thin limb of Henle's loop thus participates in the formation of concentrated urine as one of the target renal tubular segments of AVP. 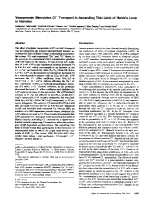 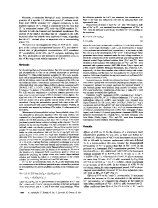 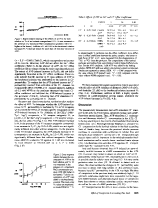 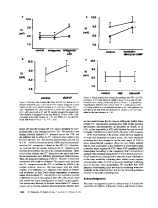 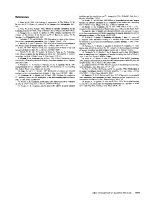