Autoantibodies to α-amino-3-hydroxy-5-methylisoxazole-4-propionic acid (AMPA) receptors may contribute to chronic hyperexcitability syndromes and neurodegeneration, but their origin is unclear. We examined LP-BM5 murine leukemia virus–infected mice, which manifest excitotoxic brain lesions and hypergammaglobulinemia, for the presence of AMPA-receptor Ab’s. Endogenous IgG accumulated upon neurons in the neocortex and caudate/putamen of infected mice and interacted with native and recombinant AMPA-receptor subunits with the following relative abundance: GluR3 ≥ GluR1 > GluR2 = GluR4, as determined by immunoprecipitation. In a radioligand assay, IgG preparations from infected mice specifically inhibited [3H]AMPA binding to receptors in brain homogenates, an activity that was lost after preadsorbing the IgG preparation to immobilized LP-BM5 virus. These IgGs also evoked currents when applied to hippocampal pyramidal neurons or to damaged cerebellar granule neurons. These currents could be blocked using any of several AMPA receptor antagonists. Thus, anti–AMPA-receptor Ab’s can be produced as the result of a virus infection, in part through molecular mimicry. These Ab’s may alter neuronal signaling and contribute to the neurodegeneration observed in these mice, actions that may be curtailed by the use of AMPA-receptor antagonists. 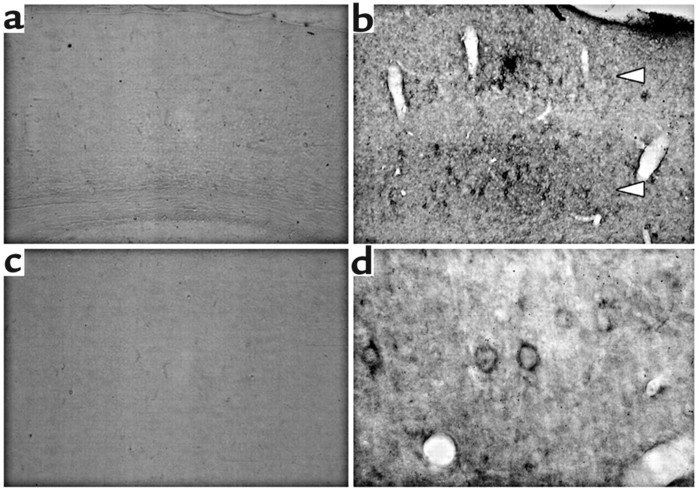 IgG accumulates on cortical neurons in LP-BM5–infected mice. Sections were cut from the brains of control mice ( and ) and mice 12 weeks after inoculation with LP-BM5 ( and ), then stained with HRP-conjugated goat anti-mouse IgG (1:250). IgG was distributed throughout the brain, with localized accumulations around neurons in layers II–III and V of the parietal cortex () (arrowheads). Closer examination reveals higher densities of IgG outside the somatic membrane of cortical neurons (). ( and ) ×100; ( and ) ×630.