We have evaluated the subunit composition of plasma von Willebrand factor (vWF) and found evidence that cleavage is present in normal individuals, increased in IIA and IIB von Willebrand disease (vWD), but decreased or absent in variants with aberrant structure of individual oligomers. vWF was rapidly purified from plasma on an analytical scale by monoclonal antibody immunoaffinity chromatography in the presence of protease inhibitors. After reduction and electrophoresis in 5% polyacrylamide gels containing sodium dodecyl sulfate, fragments of 189, 176, and 140 kD, as well as the predominant 225-kD subunit, were identified in plasma vWF from 25 normal individuals. The vWF polypeptides were detected by immunoblotting with a mixture of 55 anti-vWF monoclonal antibodies followed by 125I-rabbit anti-mouse antibody and autoradiography. In five individuals with type IIA and five individuals with type IIB vWD, the proportions of 176 and 140-kD fragments were increased relative to the intact 225-kD subunit, as determined by excising each band and quantitating incorporated radioactivity. In contrast, these fragments were either not detectable or were present in only trace amounts in variants with abnormal structure of individual oligomers (types IIC and IID, and a new variant, type IIE vWD). The results reported here provide evidence that absence of large vWF multimers in these two groups of variants results from different mechanisms. In addition, they demonstrate that partial cleavage of the plasma vWF subunit is a normal event. 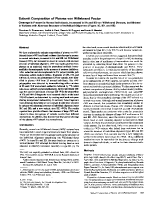 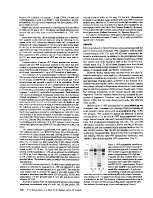 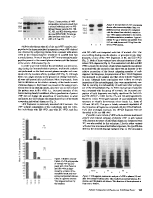 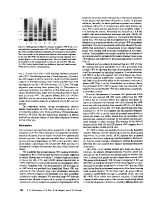 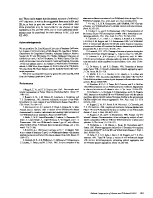