von Willebrand factor (vWF) is a large, multimeric glycoprotein that helps platelets adhere to vascular subendothelium. Although vWF binding to platelet receptors and connective tissue constituents is of fundamental importance in adhesion, there is little information regarding the nature of these vWF binding sites. In this paper, we have compared the structural requirements for vWF binding with platelet glycoprotein Ib (GpIb), heparin, and collagen and have shown that fragments derived from large vWF multimers retain biologic activity. We have shown that a 440,000-D subunit produced by disulfide reduction and alkylation of vWF polymer binds to platelet GpIb. When analyzed by polyacrylamide gel electrophoresis and Sepharose CL6B chromatography, the 440,000-D vWF oligomer is a dimer of the 220,000 subunit of fully reduced native vWF. This vWF dimer competes with 125I-vWF for binding to GpIb with an IC50 of 100 micrograms/ml (227 nM). The GpIb binding domain on vWF was further localized by digestion of native vWF polymers with Staphylococcal V8 protease. A 285,000-D fragment of vWF multimer was separated from heterogeneous 210,000-225,000-D fragments by its ability to bind to heparin. The 285,000-D fragment that bound to heparin Sepharose was composed of two disulfide-linked 175,000- and 115,000-D polypeptides. The heterogeneous fragments contained disulfide-linked 96,000, 66,000, and 53,000-D polypeptides when analyzed on polyacrylamide gel electrophoresis. The 285,000-D fragment competed with 125I-vWF for binding to GpIb with an IC50 of 22 micrograms/ml (77 nM), while the other fragments did not compete for binding. Neither the vWF dimer nor the proteolytic fragments competed with native 125I-vWF polymer for binding to collagen. 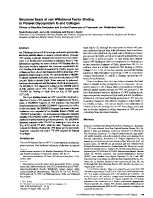 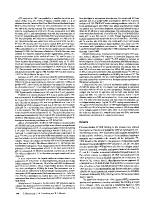 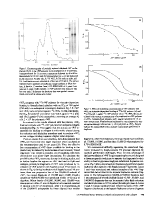 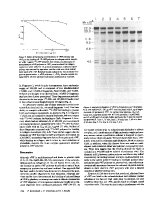 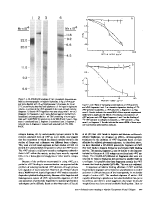 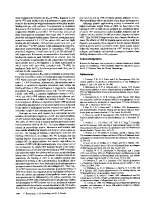 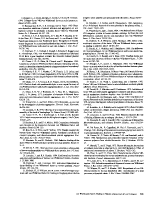