A sexual dimorphism in fetal pulmonary maturation has been described in which the female fetal lung produces surfactant earlier in gestation than the male fetal lung. This is felt to be related to the increased incidence in male newborns of the Respiratory Distress Syndrome. Dihydrotestosterone will delay surfactant production in the female fetus, and a relationship between fetal sexual differentiation and fetal lung maturation has been proposed. We hypothesized that the dimorphism in fetal surfactant production is dependent on androgen receptor function. We measured phosphatidylcholine (PC), saturated phosphatidylcholine (SPC), and sphingomyelin (S) in the amniotic fluid of fetal mice of the mouse model of testicular feminization (Tfm mouse). In this model, male carriers of the X-linked Tfm gene have no functional androgen receptors. The mean amniotic fluid phosphatidylcholine to sphingomyelin ratio (PC/S ratio) was 28% higher in females than in normal males, and the amniotic fluid PC/S ratio of the Tfm male fetuses was the same as the females. The ratio of amniotic fluid saturated phosphatidylcholine to sphingomyelin (SPC/S ratio) was lowest in males, intermediate in females, and highest in Tfm males. A significant relationship between the fetal groups and the amniotic fluid SPC/S ratio was identified by analysis of variance. There were no differences in the whole lung phospholipid content between the three groups. To substantiate the effect of androgen receptors, dihydrotestosterone was injected into pregnant carriers of the Tfm mutation, 2.5 mg/d from day 10 of gestation through the day of sacrifice. The amniotic fluid PC/S ratio was decreased in the female fetuses (consisting of both homozygous normal and heterozygous carriers of the Tfm gene), but not in the Tfm male fetuses. The overall result was no significant difference between the male and female amniotic fluid PC/S ratio while the Tfm amniotic fluid PC/S ratio remained at the level of the untreated females. We conclude that androgens affect fetal lung development via a mechanism dependent on the presence of androgen receptors. 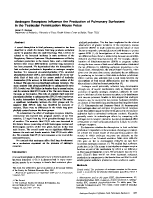 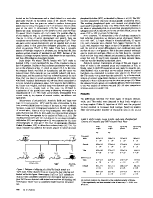 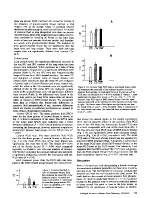 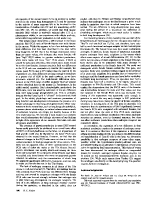 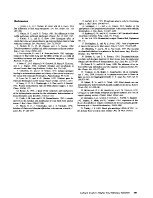