Contracting muscle cells release K ions into their surrounding interstitial fluid, and some of these ions, in turn, enter venous plasma. Thereby, intense or exhaustive exercise may result in hyperkalemia and potentially dangerous cardiotoxicity. Training not only reduces hyperkalemia produced by exercise but in addition, highly conditioned, long-distance runners may show resting hypokalemia that is not caused by K deficiency. To examine the factors underlying these changes, dogs were studied before and after 6 wk of training induced by running on the treadmill. Resting serum [K] fell from 4.2 +/- 0.2 to 3.9 +/- 0.3 meq/liter (P less than 0.001), muscle intracellular [K] rose from 139 +/- 7 to 148 +/- 14 meq/liter (P less than 0.001), and directly measured muscle cell membrane potential (Em) in vivo rose from -92 +/- 5 to -103 +/- 5 mV (P less than 0.001). Before training, resting Em of isolated intercostal muscle in vitro was -87 +/- 5 mV, and after incubation in 10(-4) M ouabain, Em fell to -78 +/- 5 mV. After training, resting Em of intercostal muscle rose to -95 +/- 4, but fell to -62 +/- 4 mV during incubation in 10(-4) M ouabain. The measured value for the Em was not completely explained by the increased ratio of intracellular to extracellular [K] or by the potassium diffusion potential. Skeletal muscle sarcolemmal Na,K-ATPase activity (microM inorganic phosphate mg-1 protein h-1) increased from 0.189 +/- 0.028 to 0.500 +/- 0.076 (P less than 0.05) after training, whereas activities of Mg2+ -dependent ATPase and 5'nucleotidase did not change. In untrained dogs, exercise to the point of exhaustion elevated serum [K] from 4.4 +/- 0.5 to 6.0 +/- 1.0 meq/liter (P less than 0.05). In trained dogs, exhaustive exercise was associated with elevation of serum [K] from 3.8 +/- 0.3 to 4.2 +/- 0.4 (NS). The different response of serum [K] to exercise after training was not explainable by blood pH. Basal insulin levels rose from 7.0 +/- 0.7 microU/ml in the untrained dogs to 9.9 +/- 1.0 microU/ml (P less than 0.05) after training. Although insulin might have played a role in the acquired electrical hyperpolarization, the reduced exercise-produced hyperkalemia after training was not reversed by blockade of insulin release with somatostatin. Although the fundamental mechanisms underlying the cellular hyperpolarization were not resolved, our observations suggest that increased Na-K exchange across the sarcolemmal membrane, the increase of Na,K-ATPase activity and possibly increased electrogenicity of the sodium pump may all play a role in the changes induced by training. 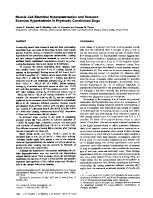 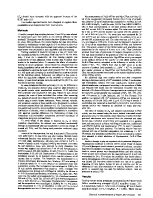 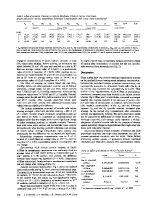 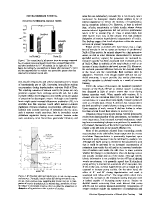 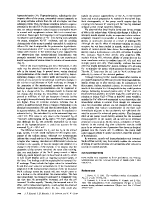 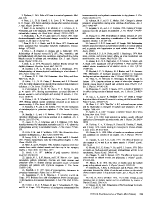