The mechanisms by which enteropathogenic Escherichia coli (EPEC), an important cause of diarrhea among infants in developing countries, induce symptoms are not defined. EPEC have a type III secretion system required for characteristic attaching and effacing changes that modify the cytoskeleton and apical surface of host cells. Infection of polarized intestinal epithelial cell monolayers by EPEC leads to a loss of transepithelial electrical resistance, which also requires the type III secretion system. We demonstrate here that EspF, a protein that is secreted by EPEC via the type III secretion system, is not required for quantitatively and qualitatively typical attaching and effacing lesion formation in intestinal epithelial cells. However, EspF is required in a dose-dependent fashion for the loss of transepithelial electrical resistance, for increased monolayer permeability, and for redistribution of the tight junction–associated protein occludin. Furthermore, the analysis of EPEC strains expressing EspF-adenylate cyclase fusion proteins indicates that EspF is translocated via the type III secretion system to the cytoplasm of host cells, a result confirmed by immunofluorescence microscopy. These studies suggest a novel role for EspF as an effector protein that disrupts intestinal barrier function without involvement in attaching and effacing lesion formation. 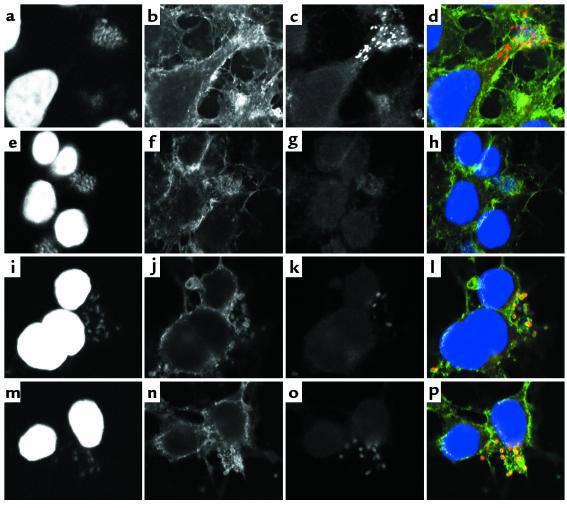 Confocal laser scanning microscopy of HeLa cells infected with wild-type and mutant EPEC strains. HeLa cells were infected in the presence of cytochalasin D with wild-type EPEC strain E2348/69 (–), mutant strain UMD874 (–), mutant strain CVD452 (–), and mutant strain UMD872 (–). Bacterial and cellular nucleic acid was labeled with DAPI (, , , and ), surface carbohydrates were labeled with WGA conjugated to Alexa 488 (, , , and ), and EspF was labeled with affinity-purified EspF antiserum and detected with a secondary Ab against IgG conjugated to lissamine rhodamine (, , , and ). Separate images of the same fields excited at different wavelengths as well as composite images (, , , and ) are shown. In the composite images the bacteria and host cell nuclei appear blue, the cell surface carbohydrates appear green, and EspF appears red.