Elimination of amyloid-β peptide (Aβ) from the brain is poorly understood. After intracerebral microinjections in young mice, 125I-Aβ1-40 was rapidly removed from the brain (t1/2 ≤ 25 minutes), mainly by vascular transport across the blood-brain barrier (BBB). The efflux transport system for Aβ1-40 at the BBB was half saturated at 15.3 nM, and the maximal transport capacity was reached between 70 nM and 100 nM. Aβ1-40 clearance was substantially inhibited by the receptor-associated protein, and by antibodies against LDL receptor–related protein-1 (LRP-1) and α2-macroglobulin (α2M). As compared to adult wild-type mice, clearance was significantly reduced in young and old apolipoprotein E (apoE) knockout mice, and in old wild-type mice. There was no evidence that Aβ was metabolized in brain interstitial fluid and degraded to smaller peptide fragments and amino acids before its transport across the BBB into the circulation. LRP-1, although abundant in brain microvessels in young mice, was downregulated in older animals, and this downregulation correlated with regional Aβ accumulation in brains of Alzheimer’s disease (AD) patients. We conclude that the BBB removes Aβ from the brain largely via age-dependent, LRP-1–mediated transport that is influenced by α2M and/or apoE, and may be impaired in AD. 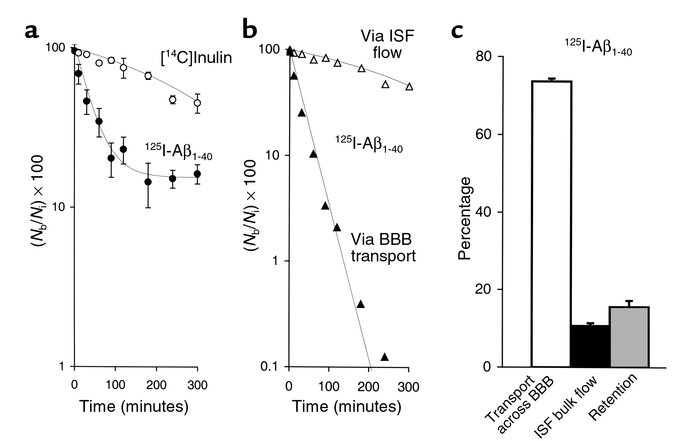 () Time-disappearance curves of [14C]inulin (open circles) and 125I-Aβ1-40 (60 nM; TCA-precipitable 125I radioactivity, filled circles) from the CNS after simultaneous microinjections of tracers into the caudate nucleus in mice. Each point represents the mean ± SD of three to seven animals. () Two components of 125I-Aβ1-40 efflux, vascular transport across the BBB (filled triangles) and transport via ISF bulk flow (open triangles), were computed with equations 3 and 4 using data from . () Relative contributions to Aβ1-40 efflux by its transport across the BBB (open bar), diffusion via ISF bulk flow (filled bar), and retention (gray bar) in the brain were studied at 60 nM concentrations and calculated from the fractional coefficients given in Table .