Adenosine deaminase (ADA) deficiency in humans results in a severe combined immunodeficiency (SCID). This immunodeficiency is associated with severe disturbances in purine metabolism that are thought to mediate lymphotoxicity. The recent generation of ADA-deficient (ADA–/–) mice has enabled the in vivo examination of mechanisms that may underlie the SCID resulting from ADA deficiency. We demonstrate severe depletion of T and B lymphocytes and defects in T and B cell development in ADA–/– mice. T cell apoptosis was abundant in thymi of ADA–/– mice, but no increase in apoptosis was detected in the spleen and lymph nodes of these animals, suggesting that the defect is specific to developing thymocytes. Studies of mature T cells recovered from spleens of ADA–/– mice revealed that ADA deficiency is accompanied by TCR activation defects of T cells in vivo. Furthermore, ex vivo experiments on ADA–/– T cells demonstrated that elevated adenosine is responsible for this abnormal TCR signaling. These findings suggest that the metabolic disturbances seen in ADA–/– mice affect various signaling pathways that regulate thymocyte survival and function. Experiments with thymocytes ex vivo confirmed that ADA deficiency reduces tyrosine phosphorylation of TCR-associated signaling molecules and blocks TCR-triggered calcium increases. 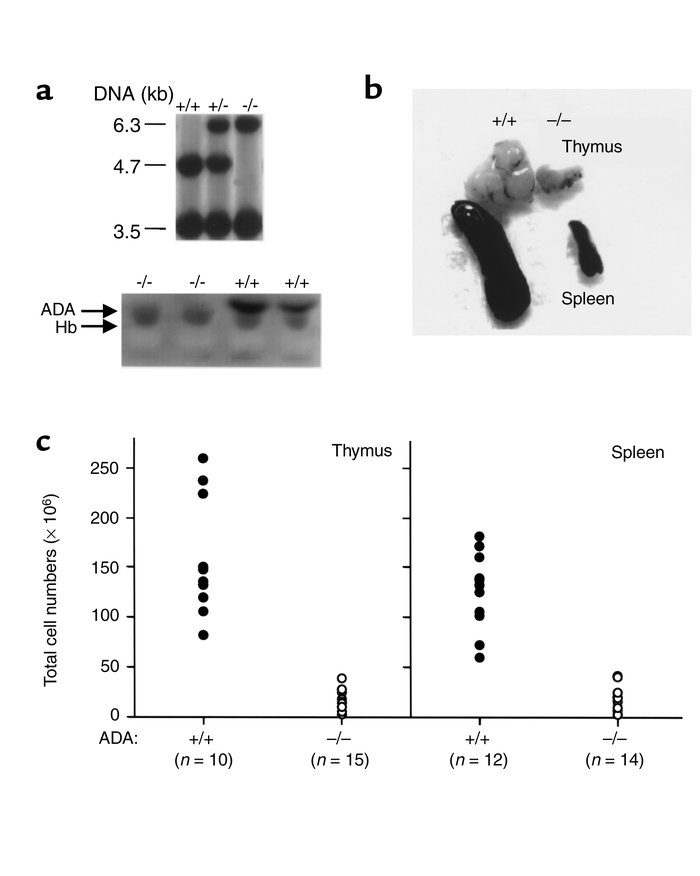 Demonstration of extensive cell death in thymus but not in peripheral lymphoid organs of mice. () Genetic and biochemical evidence of ADA deficiency in screening for , , and mice. Littermates of ADA heterozygous mice were first analyzed by zymogram assay to identify mice, and then tail DNA samples were analyzed by Southern blot as described in ref. . Arrowheads on the zymogram indicate position of ADA and hemoglobin (internal control). () Comparison of spleens and thymi from and littermates. ×3. () Decreased cellularity of lymphoid organs of mice. , number of animals analyzed.